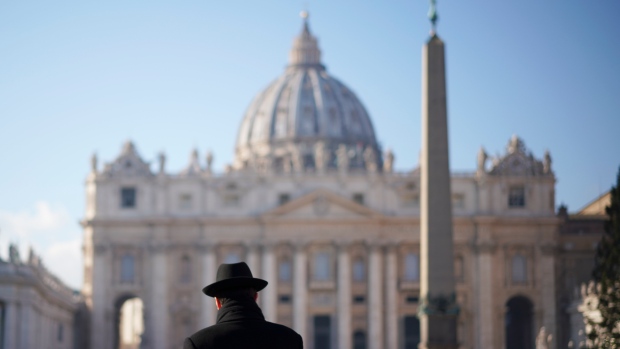 Sarah reproduced letters from Benedict making clear the 92-year-old pope had written the text and approved of publishing it as a book. "These defamations are of exceptional gravity," Sarah tweeted.

The controversy underscores the conservative-progressive battle lines that have deepened in the Catholic Church following Benedict's 2013 decision to retire, and his successor Pope Francis' more reform-minded papacy.

Benedict's involvement in the book, "From the Depths of Our Hearts," had the appearance of being an attempt to interfere with Pope Francis' ministry. Francis has said he will publish a document in the coming weeks that is expected to touch on whether married men could be ordained priests in the Amazon, to deal with a priest shortage there.

Benedict's reaffirmation of the "necessity" of priestly celibacy implied that the former pope was trying to influence the thinking of the current one.

His intervention was all the more surprising, given he had vowed to live "hidden from the world" when he retired in 2013, specifically to avoid any suggestion that he still wielded papal authority.

The book includes an introduction and a conclusion, said to be written jointly by Benedict and Sarah, as well as a chapter apiece. The Associated Press obtained galleys of the English text after the French daily Le Figaro published excerpts Sunday.

After the first reports, Francis' supporters quickly alleged Benedict had been manipulated by members of his right-wing entourage into writing something that amounted to a frontal attack on Francis. Some claimed it was evidence of elder abuse, given Benedict's 92 years and increasing frailty.

Conservatives, many of whom long for Benedict's orthodoxy, argued it was no such thing and noted that Francis too has reaffirmed the "gift" of priestly celibacy.

The Vatican tried to tamp down the furor by insisting the book was a mere "contribution" to the discussion about priestly celibacy written by two bishops in "filial obedience" to Francis.

Sarah denied there was any manipulation on his part and said Benedict was very much a part of the process. He spoke out after Spanish daily ABC, citing "sources very close to Benedict" reported the retired pope had nothing to do with the project and had been manipulated. Argentine daily La Nacion carried a similar report.

Sarah tweeted three 2018 letters from Benedict making clear the retired pope had provided him the text and participated in discussions about publishing it. As he wrote in the book, Benedict said he had begun writing "some reflections on the priesthood" before Sarah even proposed the book in September, but had put the project aside because of his waning strength.

In a statement Tuesday, Sarah chronicled all his interactions with Benedict and said the retired pope had approved the final text, including the joint introduction, conclusion and cover.

He quoted his own correspondence to Benedict saying: "I imagine that you might think your reflections might not be opportune because of the polemics they might provoke in newspapers, but I am convinced that the whole church needs this gift, which could be published around Christmas or the start of 2020."

Sarah reproduced a letter from Benedict, dated Nov. 25, that reads: "From my side, the text can be published in the form you have foreseen."

"I sincerely forgive all those who defamed me or wanted to put me in opposition to Pope Francis," Sarah said in his statement. "My attachment to Benedict XVI remains intact and my filial obedience to Pope Francis absolute."

The "sources close to Benedict" who suggested that the retired pope hadn't co-authored the book have not been identified. But Benedict's entourage is small, and is headed by his longtime secretary, Archbishop Georg Gaenswein, who also is head of Francis' papal household.

Benedict's letters to Sarah make clear the retired pope had written a text prior to Francis' Amazon synod, in which a majority of bishops backed ordaining married men as priests. After the synod concluded, Francis announced he would write his own reflections on its outcome.

The U.S. publisher of the book, Ignatius Press, which has been Benedict's English-language publisher since before he became pope, has defended the book and Benedict's participation in it.

The Rev. Joseph Fessio, Ignatius' founder and editor, said he had read the text in French and English, and said only Benedict could have written it.

"Is it really believable that Sarah would perpetrate a fraud?" Fessio asked in an email. "Or alter something from Benedict? Or claim that Benedict didn't collaborate and agree to the intro and epilogue?"

Ignatius in November published another book by Sarah, "The Day is Now Far Spent," in which the cardinal -- a hero to liturgical purists and conservatives and a quiet critic of Francis -- again defended priestly celibacy.

In the book, Sarah criticized the proposal to ordain married men in the Amazon, saying it actually showed disdain for the indigenous population and suggested God couldn't find real priests among them willing to make the sacrifice of celibacy.