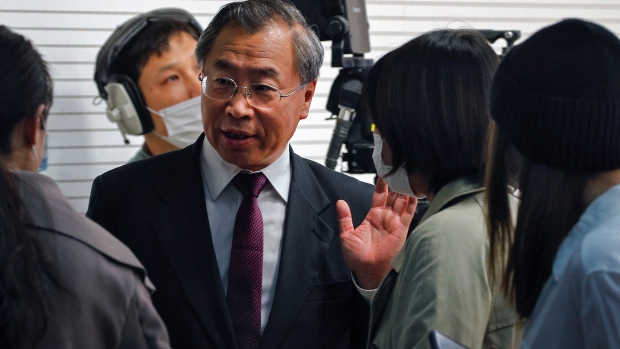 Liu Jingzhen, chairman of the SinoPharm Group, gestures as he is surrounded by reporters after a news conference of the Joint Prevention and Control Mechanism of the State Council at the National Health Commission in Beijing, Tuesday, Oct. 20, 2020. The state-owned Chinese drugmaker is setting up production lines to supply 1 billion doses of two possible coronavirus vaccines that are being tested on 50,000 people in 10 countries, Liu said. (AP Photo/Andy Wong)

BEIJING -- A state-owned Chinese drugmaker is setting up production lines to supply 1 billion doses of two possible coronavirus vaccines that are being tested on 50,000 people in 10 countries, the company chairman said Tuesday.

Testing by SinoPharm Group is “in the last kilometre of a long march,” chairman Liu Jingzhen said at a news conference. He gave no indication when results are expected.

China's fledgling drug industry is part of a global race to produce a vaccine and has four candidates in final stages of testing. Health experts say, however, that even if China succeeds, stringent certification rules in the United States, Europe and Japan might mean its vaccine can be distributed only in other developing countries.

SinoPharm is testing two vaccines in countries including Egypt, Argentina, Jordan and Peru, Liu said. Both are inactivated, meaning they use a non-infectious version of the coronavirus.

According to Liu, production lines for vaccines are being set up in Beijing and Wuhan, the city in central China where the outbreak began in December.

Chinese-developed vaccines have been tested on 60,000 people with “only slight adverse effects,” said Tian Baoguo, an official of the Ministry of Science and Technology.

Thousands of people in China including healthcare workers and others deemed to be at risk have been given the experimental vaccines. Three city governments have announced plans to inoculate members of the public who need it.