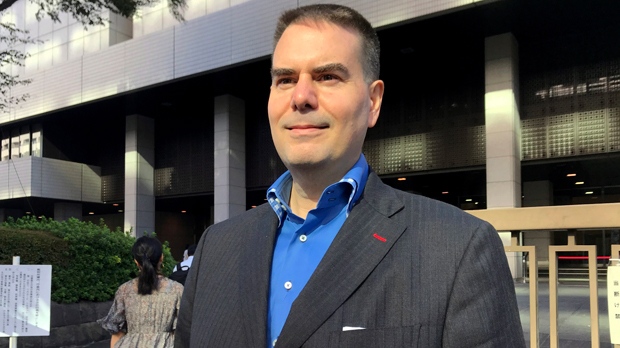 Canadian Glen Wood arrives at the Tokyo District Court Wednesday, Oct. 9, 2019, before a hearing of the case of the former brokerage manager who says he was forced from his job for taking paternity leave in Tokyo, Japan. Wood wants to regain his job of an equity sales manager at brokerage Mitsubishi UFJ Morgan Stanley. Wood sued the company last year, alleging he was harassed and forced from his job after taking a legally allowed paternity leave when his son was born in 2015. The company denies he was harassed. Wood, 49, has lived in Japan for more than three decades. The company dismissed him last year. (AP Photo/Yuri Kageyama)

TOKYO -- A Tokyo court held a hearing Wednesday into the case of a former brokerage manager who says he was forced from his job for taking paternity leave.

He sued the company last year, alleging he was harassed and forced from his job after taking a legally allowed paternity leave when his son was born in 2015. The company denies he was harassed.

Wood, 49, has lived in Japan for more than three decades. The company dismissed him last year.

Akihiro Kiyomi, Wood's former boss, and Chiharu Abe, who took over Wood's job at the company, said they reduced his workload after his child was born because they thought he needed to take it easy as a single father. But they acknowledged they had not consulted with Wood and appeared not to know Wood had hired full-time help or even that the child was born in Nepal, not Canada or Japan.

Wood also testified. All were questioned by lawyers from both sides. The previous court sessions had been closed.

“My dream vanished. Suddenly my boss changed, and he shut me out,” Wood told the court.

He applied for paternity leave, but the company refused to give it. Wood's son was born prematurely, and the doctors told him the boy may die, so he just rushed to see him, he said.

Woods returned several months later, in March 2016. He said his bosses took away chunks of his former assignments, stripped him of responsibilities like organizing events for clients and overseas travel and ended strategizing meetings he had run.

“I was being called useless, that I couldn't be trusted, that I was unreliable. My life turned into hell,” Wood told the panel of three judges in fluent Japanese.

The government, worried about Japan's shrinking population and meagre birth rate, has made parental leave a major policy priority.

On the books, Japan has relatively generous parental leave measures allowing an absence of up to 12 months. The law also stipulates there should be help during such leaves to make up for lost pay.

But few fathers of newborns take advantage of such provisions and Wood's and other similar cases show the reality is failing to match what's on paper.

Both fathers and mothers say they face serious challenges in using legally mandated leave and in balancing demands at home and work.

Wood's case has drawn considerable attention and an online petition has drawn thousands of signatures backing him. More than a dozen supporters showed up outside the court on Wednesday, some holding signs saying, “Zero tolerance for workplace harassment in Japan.”

Another person who testified during the hearing was Scott, or Shunsuke, Fujii, a former vice-president at MUFG Securities, the U.S. arm of Wood's former employer.

Fujii has settled his own harassment lawsuit against MUFG. It alleged discrimination based on his race and national origin as a Japanese-American and demanded damages for emotional pain, humiliation and suffering.

Fujii, speaking in English with an interpreter, said he and his colleagues weren't informed Wood had gone on paternity leave.

“We were told things like he went missing,” he told the court.

After Wood returned to work, Fujii said he noticed Wood was getting cut off on conference calls when he would make suggestions and was generally treated with disrespect.

Fujii's lawsuit, filed in a federal New York district court last year, said that despite positive appraisals he was derided for his lack of Japanese language skills and was ridiculed as a “gaijin,” or “foreigner.”

The company later fired him, saying it needed to cut costs and streamline its operations. But he was the only one laid off, according to the lawsuit. The company denied the allegations.

The likely timing of a decision on Wood's case is uncertain.