Despite Dorian's battering, Bahamas insists it's still open for business 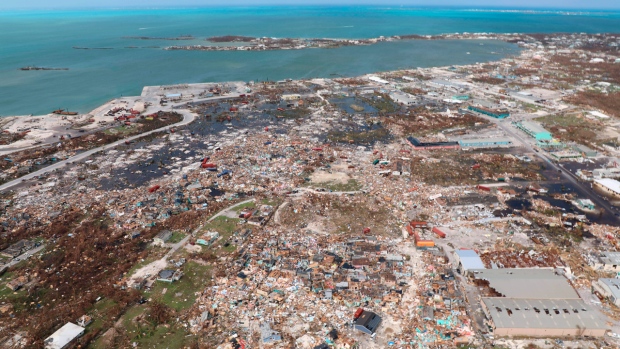 The Bahamas was on track for a record year of tourism before Hurricane Dorian hit. Now, the outlook for that vital sector is uncertain.

Some of the best-known resorts in the 700-island chain, like Atlantis, Paradise Island, were unscathed by the monster storm. So was Nassau, the largest city.

But 100 miles away, on Grand Bahama Island and the Abaco islands, many smaller hotels and vacation rentals were damaged or destroyed. That leaves the Bahamas with a double challenge: convincing tourists to keep coming without trivializing the suffering on the affected islands.

“All of the donations are welcome, but they can also, very much, assist us by still visiting the islands of the Bahamas in the unaffected areas. They are open for business,” said Ellison Thompson, the deputy director general of the Bahamas Ministry of Tourism and Aviation.

The Bahamas depend heavily on tourism, which supplies half their annual gross domestic product of $5.7 billion, according to the Bahamas Investment Authority. By comparison, tourism brings in 20% of Hawaii's annual GDP and less than 3% of the GDP of the United States.

The Ministry of Tourism confirmed on Friday that all hotels on Abaco and Grand Bahama are closed. Together, the islands have around 3,000 hotel rooms, or 19% of the 16,000 rooms in the Bahamas, according to Frank Comito, the CEO of the Caribbean Hotel and Tourism Association. They also have hundreds of vacation homes. Airbnb lists more than 600 rentals for Grand Bahama and the Abacos islands.

According to government statistics, Grand Bahama received 670,000 visitors in 2018, the vast majority arriving on cruise ships. More than 100,000 visitors flew last year into Marsh Harbour, the largest town in the Abaco islands.

Comito has beachfront property in the Abaco islands but doesn't know how it had fared. Some hotels were providing updates on Facebook. For instance, the owners of Pelican Beach Villas said their oceanfront cottages near Marsh Harbour were completely destroyed and they were evacuated to Nassau by U.S. Customs and Border Protection officers. Firefly Resort Abaco tweeted photos of downed trees and a building with no roof and a collapsed wall.

There's also some industry in the area. Grand Bahama is home to the Freeport Container Port, a deep water port for oceangoing container ships. Hong Kong-based Hutchinson Ports, which owns the facility, said its emergency team was helping with rescue efforts and trying to re-establish power at the port. Spokesman Anthony Tam said the company's nearby cruise terminal sustained minimal damage and was expecting ships carrying humanitarian supplies as early as Monday.

Those businesses could help speed the recovery. Carnival Cruise Lines said it's still committed to a port development project in Grand Bahama announced earlier this year. Slated to be completed in 2021, the port will be the largest Carnival Cruise port in the world and is expected to create at least 1,000 jobs.

Tourism to unaffected islands could also bring in much-needed cash and provide jobs to displaced hotel workers. At the start of this year, the Bahamas Ministry of Tourism and Aviation was reporting record tourist arrivals thanks in part to the recently completed Baha Mar luxury resort. On its home page, Baha Mar has a prominent link to donate to hurricane relief efforts.

“If I were the minister of tourism, I would be strongly supporting an awareness campaign,” said Robertico Croes, who researches small island destinations at the University of Central Florida's Rosen College of Hospitality Management. “What is important is that the overall perception continues to be positive.”

“One of the best ways that people around the world can show their support and solidarity... is to visit our other islands by air or by cruise ship,” he said.

Pallab Mozumder, an environmental economist at the Florida International University, says rebuilding homes, businesses and networks of utilities in the northern Bahamas will cost between $15 billion and $25 billion. He expects it will take five years or longer to recover from the catastrophe. Hurricane Dorian's Category 5 strength and extremely low speed - which exacerbated flooding - made the devastation worse, he said.

Comito said the speed of the rebuilding effort will depend on a lot of things, including how quickly insurance claims can be processed, government incentives and the availability of building supplies and labour.

After hurricanes Irma and Maria hit the Caribbean in 2017, the World Travel and Tourism Council estimated it would take four years for the impacted islands to get back to their previous level of tourism. But Comito said that recovery is ahead of schedule. Ninety per cent of Puerto Rico's hotel rooms are back online, while the U.S. Virgin Islands has 70% of its previous capacity.