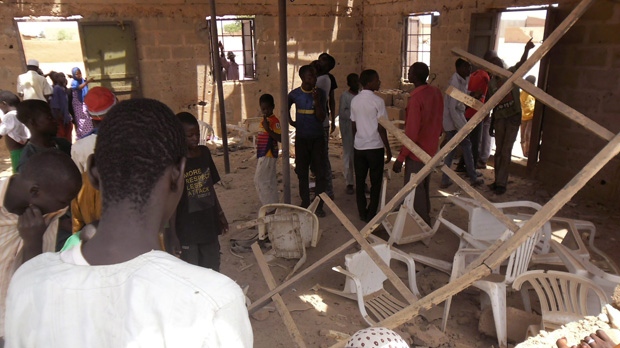 People gather inside the Redeemed Christian Church of God, after a bomb blast in Potiskum, Nigeria, Sunday, July 5, 2015. A woman suicide bomber blew up in the midst of a crowded evangelical Christian church service in northeast Nigeria on Sunday and killed at least five people, witnesses said.(AP Photo/Adamu Adamu Damaturu)

POTISKUM, Nigeria -- A woman suicide bomber blew up in the midst of a crowded evangelical Christian church service in northeast Nigeria on Sunday and killed at least five people, witnesses said.

It is the latest bombing in a string of attacks blamed on Islamic extremist group Boko Haram that's killed some 200 people in the past week.

Nearly 100 men and boys praying in a mosque were gunned down on Wednesday.

On Friday, the military said six women suicide bombers caused explosions that killed scores of people including a soldier at Zabamari Muna village outside Maiduguri, the biggest city in northeast Nigeria and the birthplace of Boko Haram.

Police Sunday rushed to the Redeemed Christian Church of God in Potiskum, the largest city in northeastern Yobe state. Wailing women and stunned men wandered around the wreckage of smashed bricks and twisted zinc sheets blown off the church roof. One congregant said the blast came from a woman in the congregation. She was too scared to give her name.

An Associated Press reporter counted five bodies from the blast in the morgue of the local hospital, where a wounded woman was being treated.

Nigeria's President Muhammadu Buhari on Friday condemned the latest attacks as barbaric and said they underline the need for an expanded multinational army to crush the extremists.

Boko Haram took control of a large swath of northeast Nigeria last year and declared an Islamic caliphate. As it stepped up cross-border attacks, Nigeria and its neighbours deployed a multinational army that this year drove them out. But attacks are increasing as Boko Haram apparently responds to an Islamic State group directive to intensify violence during the Muslim holy month of Ramadan.

At least 13,000 people have died in the 6-year-old Islamic uprising that has driven 1.5 million people from their homes.