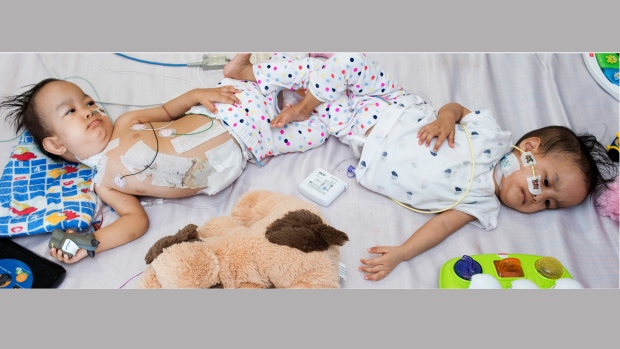 In this Nov. 14, 2018, file photo provided by RCH Melbourne Creative Studio, 15-month-old girls, Nima and Dawa lie in their hospital bed in Melbourne, Australia, following a successful separation surgery last week. The formerly conjoined twins from Bhutan left Royal Children's Hospital Monday, Nov. 26, 2018, in a single pram more than two weeks after they were separated in delicate surgery. The girls were joined from the lower chest to just above the pelvis and shared a liver. (The Royal Children's Hospital Melbourne Creative Studio via AP, File)

MELBOURNE, Australia - Formerly conjoined twins from Bhutan were released from an Australian hospital on Monday more than two weeks after they were separated in a delicate surgery.

The 15-month-old girls Nima and Dawa were joined from the lower chest to just above the pelvis and shared a liver. They were separated during an operation at Melbourne's Royal Children's Hospital on Nov. 9 that lasted almost six hours. A major challenge had been to reconstruct their abdomens.

“Thank you, everyone,” their grateful mother, Bhumchu Zangmo, said as she wheeled her daughters from the hospital where their lives have been transformed since their arrival on Oct. 2.

The hospital's head of pediatric surgery Joe Crameri told reporters the twins had made an “excellent recovery” and were acting independently.

“I think to the staff on the wards ... they've seen a remarkable two girls, girls that we've watched over this journey who started off really attached and bonded to one another, but ultimately frustrated with one another,” Crameri said.

The twins had become “incredibly anxious” after the separation when they became aware that they were no longer in front of each other, he said.

Before they return to Bhutan, the girls will continue their recovery at a retreat in the town of Kilmore outside Melbourne run by the charity that brought them to Australia, the Children First Foundation.