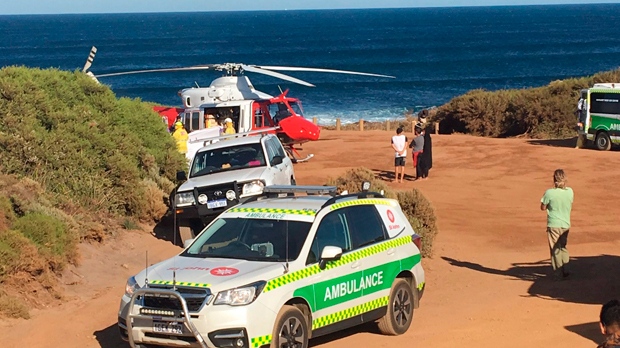 A rescue helicopter and other emergency vehicles are seen at the scene of the shark attack in Gracetown, Australia, Monday, April 16, 2018. A surfer mauled by a shark Monday off southwest Australia managed to swim to shore despite serious injuries to both of his legs, an official and a witness said. (Anthony Pancia/Australian Broadcasting Corp via AP)

BRISBANE, Australia - A girl was attacked by a shark at the same Great Barrier Reef island in Australia on Thursday as a woman who was mauled a day earlier.

The 12-year-old was rescued by helicopter from Cid Harbour on Whitsunday Islands off the Queensland state coast after being bitten on the upper leg.

The girl, who was holidaying with her father and sister, is in critical condition and will have surgery. She had lost a significant amount of blood after she was mauled on the thigh, said Queensland ambulance operations manager Tracey Eastwick.

“It is horrific ... for us as a community of paramedics it is quite confronting to have two similar incidents in the space of less than 24 hours,” she told reporters.

The last shark attack in the area was eight years ago.

The Queensland government will set three drum lines in the area in a bid to prevent any further attacks.

Fisheries officers and water police were also patrolling the area, while swimmers were told to stay out of the water at the popular holiday hotspot.

On Wednesday evening, Justine Barwick, 46, was also mauled off the same island while snorkeling.

The mother of two is in critical condition after overnight surgery.

A rescue helicopter that picked her up was just 15 minutes away from the scene due to an earlier operation.

Crewman Ben McCauley said an emergency doctor, who was sailing nearby, and others who gave first aid to Barwick had likely saved her life.