Hundreds of Yellowstone bison to be culled this winter 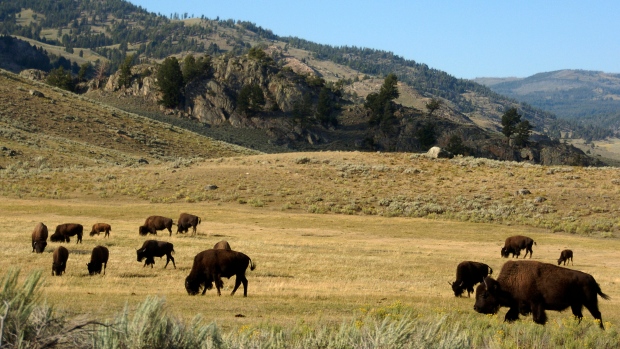 In this Aug. 3, 2016 file photo, a herd of bison graze in the Lamar Valley of Yellowstone National Park in Wyo. (AP Photo/Matthew Brown, File)

BOZEMAN, Mont. - National park officials in Wyoming have announced plans for the selective slaughter of between 600 and 900 Yellowstone bison this winter to help manage population numbers.

The Bozeman Daily Chronicle reported Tuesday that the officials expect most of the animals to be taken by hunters or shipped to slaughter. Some would stay alive in corrals or under park quarantine.

Officials say the exact number of bison expected to be culled out of the estimated 4,900 depends on the winter migration.

State, federal and tribal agencies managing bison say the winter plan was finalized Tuesday under the Interagency Bison Management Plan, a day after a judge rejected an attempt to block bison hunts this year.

In this Feb. 12, 2011 file photo a bison from Yellowstone National Park walks through the snow shortly before being shot and killed during a hunt by members of an American Indian tribe, near Gardiner, Mont. (AP Photo/Ted S. Warren, File)