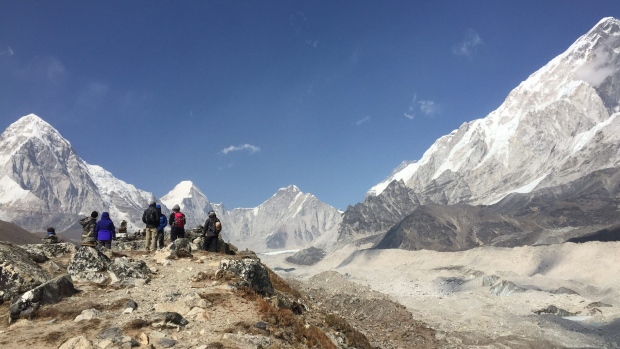 This April 9, 2016 photo shows snow-capped peaks in the Himalayas, just north of the village of Lobuche, Nepal and about a three-hour walk from Everest Base Camp. (AP / Karin Laub)

NEW DELHI - Indian air force pilots spotted five bodies Monday in the Himalayas near the border with China and Nepal while searching for eight climbers attempting to chart a new route near India's second-highest peak who went missing in an avalanche.

Dr. Vijay Kumar Jogdande, a civil administrator in the northern state of Uttarakhand, said the bodies, which he believes are those of some of the missing climbers, were identified using high-resolution photographs taken from a military helicopter before a rescue operation was suspended for the day because of heavy snowfall and high winds.

An operation to find the other three mountaineers will resume Tuesday, Jogdande said, cautioning that they may have been buried in an avalanche that struck the section of the mountain where they were climbing earlier this week.

Government officials are consulting the Indian army and Indo-Tibetan Border Police on how to retrieve the bodies from a summit on Nanda Devi East, a mountain near Nanda Devi, India's second-highest peak.

Jogdande said a team was assessing the feasibility of sending a mountaineering team to the site where the bodies were spotted, which is at an altitude of 5,000 metres (16,404 feet).

“Both the terrain and the weather make safety a real issue,” he said. “There is always a fear that people going for the rescue may get stuck there.”

The team, led by British climber Martin Moran, began its ascent May 13 of the previously unclimbed and unnamed 6,477-meter (21,250-feet) peak on Nanda Devi East, according to Moran Mountain, Moran's Scotland-based company. The team includes four Britons, two Americans, an Australian and an Indian liaison officer.

The team had last been in touch with base camp on May 26, according to four members of their expedition who had remained there, hemmed in by the heavy snowfall and rescued Sunday.

The four-member team at base camp, all British nationals, was led by 44-year-old Mark Thomas. The other three members were Zachary Quain, 32, Kate Armstrong, 39, and Ian Wade, 45.

Amit Chowdhary, spokesman for the Indian Mountaineering Foundation, said the missing climbers' location was known up to May 26. He said they had been in radio contact with the other four expedition team members.

Chowdhary said when the Thomas-led team was no longer receiving radio updates from the other expedition team, Thomas went to look for the missing climbers the next day.

Jogdande said Thomas and the three others received first aid at a hospital in the town of Pithoragarh and were later released.

It was not immediately clear why Moran chose to summit the unclimbed peak.

Maninder Kohli, a mountaineer and foundation member, said Moran was known for his passion for trying new peaks.

“It's also possible that if the other members of the group were less experienced, and knowing how challenging Nanda Devi East is, that Martin thought this peak would be a kind of rehearsal that would acclimatize them for the harder task,” Kohli said.

India does not allow climbers on the Nanda Devi peak. They are allowed only onto its slightly lower twin Nanda Devi East, which together stand in the centre of a ring of peaks. Climbers describe it as diabolically difficult.

“In comparison with Nanda Devi East, Everest is a picnic,” Kohli said. “Those who climb Everest wouldn't even be able to place a foot on it. Only the most technically competent can attempt it.”

While Mount Everest, the world's tallest peak, has legions of followers, Nanda Devi, which means “bliss-giving goddess,” has its own aura among hardcore mountaineers because so few have managed to reach the summit and many others have died trying.

Tenzing Norgay, the first man to climb Everest along with Sir Edmund Hillary, described Nanda Devi East as the toughest peak in the Himalayas. Since so few have managed to climb it, the mountain has remained pristine, unlike littered and congested Everest.

“At one point along this narrow slippery ridge, you come to the Three Pinnacles. These are three huge towers of ice, one after another, that rise at 90 degrees in front of you. You have to pass them to get back onto the ridge,” Kohli said.

For Hindus, the lofty majesty of the Himalayas makes them the abode of the gods and, therefore, sacred. Legend has it that Nanda Devi, the presiding goddess of the region, was a princess who, while trying to escape a prince who was pursuing her, scaled the peak and became one with the mountains.

Getting to the starting point of the trek to the top alone is grueling. It involves a six-hour train journey from New Delhi, India's capital, to Kathgodam railway station in Uttarakhand. From there, it is a 10-hour drive up to Munsiyari, located at 2,290 metres (7,513 feet), where tourist lodges are available and where mules can be hired to carry the equipment.

From Munsiyari, trekkers walk 90 kilometres (56 miles) to the Nanda Devi Base Camp, a journey that takes them through forests, glaciers and waterfalls, as well as ravines over the thundering Gori Ganga River.