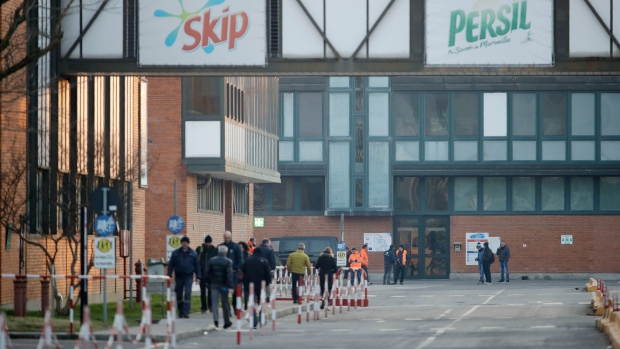 Workers inside the Unilever factory in Casalpusterlengo, near Lodi in Northern Italy, wait to be tested for virus infection Friday, Feb. 21,2020. Health officials reported the country's first cases of contagion of COVID-19 in people who had not been in China. A man hospitalized in Codogno works here. (AP Photo/Luca Bruno)

CODOGNO, Italy - The number of people in Italy infected with the new virus from China more than quadrupled Friday due to an emerging cluster of cases in the country's north that prompted officials to order schools, restaurants and businesses to close.

Many of the 14 new cases represented the first infections in Italy acquired through secondary contagion and brought the country's total to 17. The cluster was located in a handful of tiny towns around Lodi, in the Lombardy region, said the Lombardy regional health chief Giulio Gallera.

The first to fall ill was a 38-year-old Italian who met with someone who had returned from China on Jan. 21 without presenting any symptoms of the new virus, health authorities said. That person was being kept in isolation and appears to present antibodies to the virus.

The 38-year-old is now hospitalized in critical condition. His wife and a friend of his also tested positive for the virus. Three patients at the hospital in Codogno where he went with flu-like symptoms on Feb. 18 also have infections, as do five nurses and doctors.

Another three people, who frequented the same cafe in the Lombardy region, also tested positive Friday in addition to the eight people at Codogno hospital, Gallera said.

Italian Health Minister Roberto Speranza said Italy is now seeing the same sort of “cluster” of cases that Germany and France have seen. He defended the precautionary measures Italy took previously, noting that Italy remains the lone European country to have barred flights to and from China, Hong Kong, Macau and Taiwan.

“We had the highest measures in Europe,” he said.

In response to the emerging cluster, the mayor of Codogno ordered schools, public buildings, restaurants and coffee shops closed. The Italian health ministry ordered anyone who came into direct contact with the first three people who tested positive to be quarantined for 14 days.

About 150 people, including medical personnel, were in isolation undergoing tests. The Health Ministry advised area residents to stay home as a precaution.

Local officials in another town, Casalpusterlengo, ordered local schools closed through Tuesday. A third town, where the infected couple live, Castiglione d'Adda, said its libraries, public offices, gyms and garbage depots would be closed as a health precaution.

“In other parts of the world, and also in China, it has been demonstrated that this system (of self-isolation) helps in a substantial way to block the spread,” Lombardy regional president Attilio Fontana said. “But we must not let ourselves be overcome by panic.”

The Codogno hospital closed its emergency room, and staff were seen wearing masks as movers brought in new beds and furniture as the quarantine got under way. The manager who travelled to China remains asymptomatic but was put into isolation at another hospital, Gallera said.

Rome's infectious disease hospital is currently caring for three other people who were infected, including a Chinese couple from hard-hit Wuhan and an Italian who is now testing “persistently negative” for the virus after two weeks of anti-viral treatment.

Despite the calls for safeguards, Italians were having a hard time finding protective face masks. A sampling of Milan pharmacies reported selling out out weeks ago, as did a pharmacist in Codogno.

A woman walks in a street in the center of Codogno, near Lodi in Northern Italy, Friday, Feb. 21,2020. Health officials reported the country's first cases of contagion of COVID-19 in people who had not been in China. The hospital in Codogno is one of the hospitals - along with specialized Sacco Hospital in Milan - which is hosting the infected persons and the people that were in contact with them and are being isolated. (AP Photo/Luca Bruno)