Japan storm survivors though worst was over, then it flooded 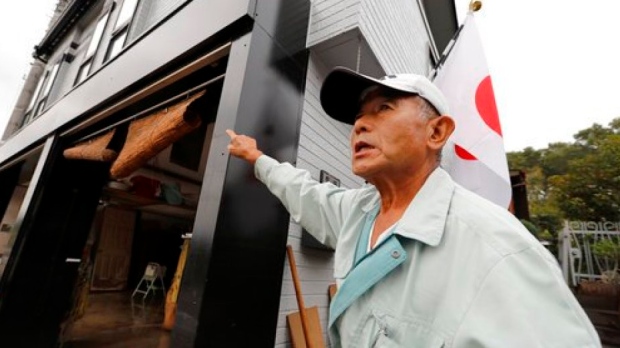 Kazuo Sato shows the flood water level of his house as he cleans up Monday, Oct. 14, 2019, in Kawagoe City, Japan. Typhoon Hagibis dropped record amounts of rain for a period in some spots, according to meteorological officials, causing more than 20 rivers to overflow. Some of the muddy waters in streets, fields and residential areas have subsided. But many places remained flooded, with homes and surrounding roads covered in mud and littered with broken wooden pieces and debris. (AP Photo/Eugene Hoshiko)

KAWAGOE, Japan - After the worst of Typhoon Hagibis passed over this town north of Tokyo, Kazuo Saito made sure there was no water outside his house and went to bed.

He woke up a few times throughout the night to check, but by the time he woke for good on Sunday morning, the view outside his window was almost unrecognizable.

“There was a huge river flowing in front of me,” the 74-year-old said.

The storm, which made landfall in the Tokyo region late Saturday, had dumped record amounts of rain that caused rivers to overflow their banks, some of them damaged. It turned many neighbourhoods in Kawagoe into swamps.

Crews were working across central and northern Japan on Monday to dig through mudslides and search riverbanks for those missing in the storm, which killed dozens of people and left thousands of homes on Japan's main island flooded, damaged or without power. Some 30,000 people were in evacuation centres.

More than 200 rivers overflowed and inundated the typhoon-hit areas, according to the Ministry of Land, Infrastructure and Transportation. Hagibis caused damage to extensive areas, most likely because it hardly lost strength due to warmer-than-usual sea temperatures and became a super-sized typhoon, unlike usual autumn typhoons that wane while travelling north, experts said.

Saito, wearing work clothes and long rubber boots, said he was determined not to evacuate ahead of the storm or on Sunday despite the floodwaters because “this is my only home.” His wife, Sumiko, thought evacuating at that point was too late and more dangerous.

“I was terrified and my knees trembled,” she said.

As they waited, the waters gradually subsided, and on Monday they were able to come down from the second floor of their home. They were cleaning their dirt-covered front yard and sorting out mementos and furniture that were damaged when floodwaters reached nearly the ceiling of their garage.

“If I had known the water was to come this high, I could have evacuated them inside the house,” Kazuo Saito said.

The storm was the worst Saito could recall in all his years in Kawagoe. He said a tropical storm in 1999 that flooded more than 3,000 homes had floodwaters that were only waist-high.

“This time, it came up to here,” he said, raising his arm above his head and pointing to the dark line left by the water

At a nearby nursing home, dozens of residents were evacuated on rubber boats Monday, city officials said. On Sunday, more than 120 residents of Kings Garden, another care home for the elderly, were taken to safer facilities.

Hisako Satake, 87, who was among those evacuated from Kings Garden, was brought to a nearby elementary school where about 20 others had also taken shelter.

She said that when the floodwaters started seeping into the ground floor of her nursing home, she and other residents were escorted to a chapel on the second floor. They then lost running water and electricity.

“It was a bit of surprise,” Satake said, sitting on a folded futon mattress on the school gymnasium floor. “So we prayed, and that helped us to stay calm.”