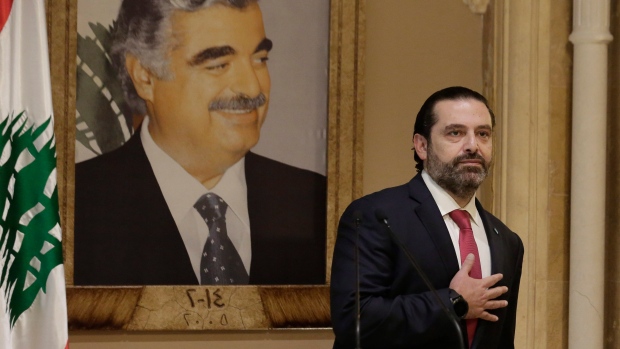 BEIRUT - Lebanon's outgoing prime minister called on several Arab and world leaders Friday to help his country secure credit lines for imports from friendly nations as the tiny Mediterranean country passes through its worst economic and financial crisis in decades.

According to a statement released by his office, Saad Hariri sent letters to the leaders of Saudi Arabia, Egypt, France, China, Russia, Italy and the United States as part of his efforts to ease the liquidity crisis and secure food stuff and raw materials.

Lebanon is experiencing its worst economic and financial crisis amid zero economic growth and massive debt. Local banks have imposed unprecedented capital controls and thousands of employees have been either laid off or had their salaries slashed.

The crisis has worsened since Oct. 17, when nationwide protests against years of corruption and mismanagement erupted, leading to the resignation of Hariri's government two weeks later. Protesters now want that entire political elite, that has ruled the country since the end of the 1975-90 civil war, out.

President Michel Aoun said the financial measures taken in the country are “temporary because of the current financial conditions.”

Aoun, who spoke during a meeting with international investment bankers, said that dealing with the economic and financial crisis will be the priority of the new government once it's formed. He added that offshore exploration for oil and gas will begin in January and would boost the country's credentials.

Aoun has called for binding consultations with heads of parliamentary blocs to name a new prime minister on Monday. He added that the formation of a new Cabinet would help friendly countries release $11 billion in loans and grants made by international donors at the CEDRE conference in Paris last year.

Lebanon imports most of its basic needs, including wheat, petrol and medicine, leading to a huge trade deficit. Importers have been facing difficulties in getting U.S. dollars to cover imports as the local currency, which has been pegged to the dollar since 1997, lost 40% of its value on the black market.