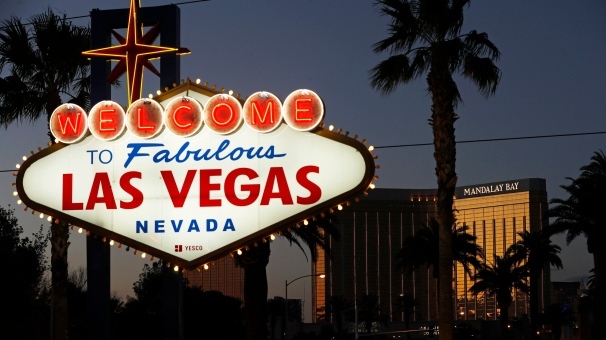 In this Sept. 21, 2018, file photo, the Mandalay Bay hotel and casino reflects the last sunlight of the day along the Las Vegas Strip in Nevada. (AP Photo/John Locher, File)

LAS VEGAS -- Las Vegas police shot a man who fought with officers, including one who was knocked unconscious, before dawn Thursday on the tarmac near a terminal at McCarran International Airport, authorities said.

The wounded intruder and the injured officer were hospitalized after the incident about 4 a.m. in a restricted area outside the boarding gates of the main terminal serving domestic airlines, police Capt. Nichole Splinter said.

The names of the wounded man and the officers were not immediately made public. The injured officer was treated and released, said Officer Aden OcampoGomez, a department spokesman.

Police encountered the man outside Terminal 1 about 20 minutes after officers investigated an alarm indicating that someone went through a security door at a separate passenger building, Terminal 3, Splinter said. Officers did not initially find anyone, she said.

The man became “extremely irate” and attacked the officers while he was being escorted in custody to a public area of the airport near Terminal 1, Splinter said.

One officer was knocked unconscious and one officer tried using a less-than-lethal device to subdue the man before the third officer fired twice, Splinter said. Police did not immediately disclose whether the officer used a stun gun, baton or other device before shots were fired.

Splinter said the wounded man underwent surgery at the hospital.

Cellphone video taken by person who was apparently in Terminal 1, aired by KVVU-TV in Las Vegas, shows three police officers around a man sitting handcuffed on the well-lit tarmac. It does not show a struggle or the shooting.

OcampoGomez said police believe the man who was apprehended was the same person who entered the secure area at Terminal 3. It did not appear he had a weapon and it was not immediately clear if he was a traveller, OcampoGomez said.

The officers were equipped with body-worn cameras and OcampoGomez said the details of the struggle would be made public along with the names of the officers and the wounded man in coming days.

Terminal 3 primarily serves international flights and would have been quiet at the time, Jones said.

A paved causeway over a sunken airport access road connects the terminals, serving as a taxiway and connector for baggage carts and airport vehicles. The route passes by the Federal Aviation Administration's airport traffic control tower.

FAA spokesman Ian Gregor said the investigation was being handled by local authorities.

OcampoGomez said police did not know how the man got between the two buildings.