NATO to endorse measures against Russia over missile treaty 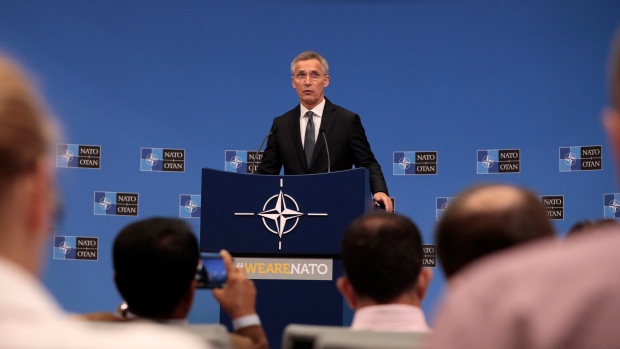 BRUSSELS -- NATO defence ministers are set to endorse a list of measures that could be used against Russia should it refuse to comply with a major Cold War-era missile treaty, the military alliance's secretary general, Jens Stoltenberg, said Tuesday.

In February, the United States began the 6-month process of withdrawing from the landmark 1987 Intermediate-Range Nuclear Forces treaty agreed with the then Soviet Union, blaming Russia for refusing to comply with the pact. The INF treaty will end unless Russia changes its mind by August 2, and NATO ministers are weighing what steps to take in response.

"Tomorrow we will decide on the next steps in the case Russia does not comply," Stoltenberg told reporters on the eve of the meeting at NATO headquarters in Brussels.

The treaty bans production, testing and deployment of land-based cruise and ballistic missiles with a range of 500-5,500 kilometres (310-3,400 miles).

The Pentagon has shared information with NATO allies asserting that Russia's 9M729 missile system contravenes the treaty. It believes the ground-fired cruise missile could give Moscow the ability to launch a nuclear strike in Europe with little or no notice.

Moscow insists the missile has a range of less than 500 kilometres and counters that the U.S., itself, has been breaching the INF treaty.

Stoltenberg declined to elaborate on what steps NATO might take, but he did say some can be implemented "quite quickly." Others, he said, "will take more time."

Whatever is decided, it's unlikely the measures will be made public before August 2.

NATO is trying to encourage Russia to take part in a meeting of ambassadors next week to discuss the issue, as time runs out to save the INF treaty -- which is considered a cornerstone of European defence.

Stoltenberg said "there are just five weeks left for Russia to save the treaty."

He said NATO's response will be "defensive, measured and co-ordinated. We will not mirror what Russia does, we do not intend to deploy new land based nuclear missiles in Europe. We do not want a new arms race."