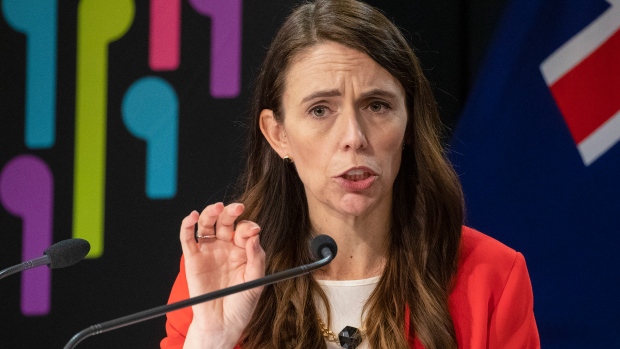 FILE - New Zealand Prime Minister Jacinda Ardern gestures during a press conference at parliament in Wellington, New Zealand on March 23, 2022. Ardern on Saturday, May 14, 2022 posted a photo of her positive test result on Instagram and said she was disappointed to miss several important political announcements over the coming week, including the release of the government's annual budget and a plan to reduce greenhouse gas emissions. (Mark Mitchell/Pool Photo via AP, File)

WELLINGTON, New Zealand (AP) - New Zealand Prime Minister Jacinda Ardern has tested positive for COVID-19 but said she still plans to travel to the U.S. later this month for a trade trip and to give the commencement speech at Harvard University.

Ardern on Saturday posted a photo of her positive test result on Instagram and said she was disappointed to miss several important political announcements over the coming week, including the release of the government's annual budget and a plan to reduce greenhouse gas emissions.

“I'm gutted to miss being there in person, but will be staying in close touch with the team and sharing some reckons from here,” she wrote.

Ardern, who is fully vaccinated, had been isolating at her Wellington residence since Sunday after her fiance Clarke Gayford tested positive for the virus. Under New Zealand's health rules, people must isolate for seven days if somebody in their household tests positive.

Ardern said she returned a weak positive rapid antigen test on Friday night and then a strong positive test on Saturday morning.

She also disclosed that the couple's 3-year-old daughter, Neve, had tested positive for the virus on Wednesday.

“Despite best efforts, unfortunately I've joined the rest of my family and have tested positive for COVID 19,” Ardern wrote.

She said that “To anyone else out there, isolating or dealing with COVID, I hope you take good care of yourselves!”

In her post, Ardern didn't describe her symptoms, although her office said in a statement she began experiencing symptoms on Friday.

Ardern is the latest in a long list of world leaders to contract the virus. Among the first and most serious cases was British Prime Minister Boris Johnson, who was hospitalized for a week in April 2020 before vaccines were available.

When the pandemic began, New Zealand closed its borders and imposed strict lockdowns that enabled it to entirely eliminate several outbreaks of the virus and continue life much as normal. But as outbreaks proved harder to contain and most of the population got vaccinated, the country eventually abandoned its COVID-zero policy.

New Zealand has this year experienced its first major outbreak as the omicron variant has rapidly spread.