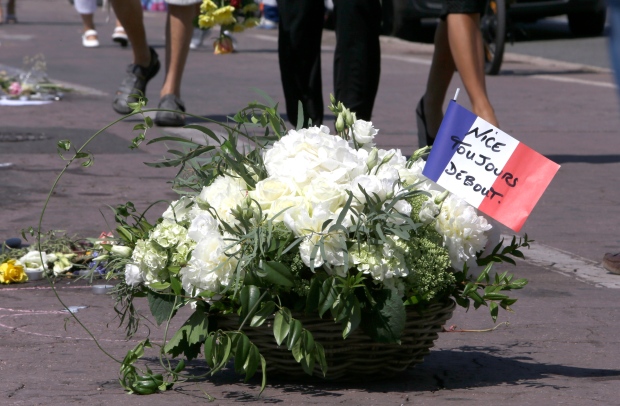 Flowers lay on the famed Promenade des Anglais at the scene of Thursday's truck attack, prior to a minute of silence in Nice, southern France, Monday, July 18, 2016, to honor the victims of the Bastille Day attack. (AP Photo/Claude Paris)

MSAKEN, Tunisia -- The uncle of the truck driver who killed 84 people on the French Riviera says his nephew was indoctrinated about two weeks ago by an Algerian member of the Islamic State group in Nice, as anti-terrorism authorities question potential accomplices in the devastating attack.

France held a countrywide moment of silence Monday to remember the victims, but the national mourning was punctured by anger and political division. Crowds massed on the Riviera seafront booed the visiting prime minister, whose Socialist government is coming under increasing criticism from the public and the conservative opposition for failing to prevent the Bastille Day carnage.

IS claimed responsibility for last week's attack, though Interior Minister Bernard Cazeneuve said Monday that investigators have found no sign yet that attacker Mohamed Lahouaiyej Bouhlel had links to a particular network.

Paris prosecutor Francois Molins, who oversees terrorism investigations, said Bouhlel had expressed support for the Islamic State group and searched online for information about the Orlando attack on a gay nightclub. Searches of Bouhlel's computer and phone showed his online searches relating to IS, other jihadi groups and violent images, Molins said.

The driver's uncle, Sadok Bouhlel, told The Associated Press in Tunisia that given Bouhlel's family problems -- he was estranged from his wife and three children -- the Algerian extremist "found in Mohamed an easy prey for recruitment."

French officials couldn't confirm Monday that attacker Bouhlel had been approached by an Algerian recruiter, saying that the investigation is ongoing.

Bouhlel's rapid radicalization has puzzled investigators. Friends and family said he hadn't been an observant Muslim in the past. Cazeneuve said Monday on RTL radio that the driver may have been motivated by IS messages, but not necessarily co-ordinating with a larger network.

"Mohamed didn't pray, didn't go to the mosque and ate pork," said the uncle, a 69-year-old retired teacher, in the driver's hometown of Msaken, Tunisia. The uncle said he learned about the Algerian recruiter from extended family members who live in Nice.

Dr. Raj Persaud, a consultant psychiatrist and professor at London's Gresham College, said Bouhlel's path toward violent extremism might have been longer than people around him noticed.

"This is someone who was already deeply disturbed and had already been on a journey, and at the end of it, maybe there was what looks like a rapid process of radicalization. But that was just what crystallized his beliefs, a lot of the huge transformation had already occurred in the background," he said.

Bouhlel took selfies in his truck in the hours before he plowed through the festive crowd, and sent a text message minutes before the attack asking for more weapons, the prosecutor said.

Sadok Bouhlel is devastated by his nephew's act, and doesn't want him buried in Msaken.

"He made more than 80 families grieve, and stained the reputation of our town and our country," he said.

Many of the dead and injured were children watching a fireworks display with their families. Cazeneuve said 59 people were still hospitalized after Thursday's attack, 29 of them in intensive care, out of 308 people injured overall.

Molins said officials have begun returning remains to the families, though 13 of the 84 who died have yet to be identified.

Along the curved, rocky Nice beach Monday, thousands of people gathered to mark the moment of silence, alongside religious leaders from the Muslim, Christian and Jewish communities and other local dignitaries.

At the Pasteur hospital, where many injured are being treated, emergency responders and other medical personnel gathered in the courtyard for the moment of silence, standing still in a row and clapping when it was over. A sign posted around town demonstrates a strong feeling of solidarity, calling for blood donations, stuffed animals for injured children and ending "Let's unite against the crazy ones!"

But bitterness is also close to the surface. French Prime Minister Manuel Valls was loudly booed as he arrived at and left the ceremony on the Nice shore.

President Francois Hollande's Socialist administration has come under blistering criticism from opposition conservatives after the attack. Former President Nicolas Sarkozy accused the government of bad policies that he says failed to prevent three major attacks in the past 18 months.

"Everything that should have been done over the past 18 months was not done," Sarkozy said on TF1 television Sunday night. "We are in war, a total war. Our enemies don't have no taboos, no borders, no principles. So I will use strong words: It will be us or them."

Cazeneuve hit back Monday, listing a series of laws and extra police forces created under Hollande's presidency "to face a threat that France wasn't prepared for" when he took over from Sarkozy in 2012.

After a special security meeting, Defence Minister Jean-Yves Le Drian said French forces in the U.S.-led coalition struck IS targets again overnight and on Saturday. French warplanes have been involved in the operation in Iraq and to a lesser degree in Syria.

Seven people are in custody in the probe into the Nice attack. Three of the suspects were brought to French intelligence headquarters in Paris on Monday to face eventual terrorism charges, according to a security official.

At the home of one of the suspects, an Albanian national, investigators found 11 telephones, cocaine and 2,600 euros ($2,900) in cash, according to a security official and the Paris prosecutor's office.

- Angela Charlton reported from Paris. Frank Jordans and Colleen Barry in Nice, and Maria Cheng in Paris contributed to this report.