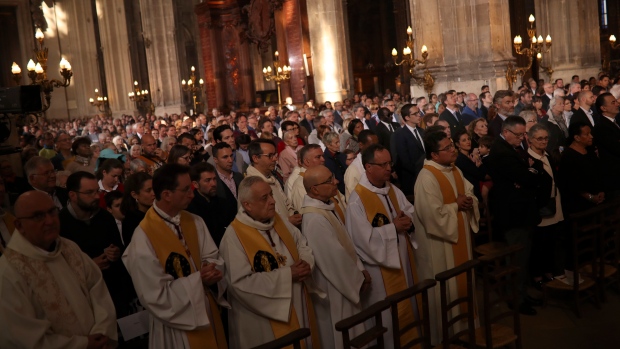 Faithfuls attend a Sunday Mass at the grandiose Saint-Eustache church on the Right Bank of the Seine river in Paris, Sunday, April 21, 2019. The archbishop of Paris and Catholics from around France and the world honored the firefighters who saved Notre Dame Cathedral, praying Sunday at a special Easter Mass for a swift reconstruction of the beloved monument. (AP Photo/Francisco Seco)

PARIS -- The archbishop of Paris and Catholics from around France and the world honoured the firefighters who saved Notre Dame Cathedral, praying Sunday at a special Easter Mass for a swift reconstruction of the beloved monument.

The fire that engulfed Notre Dame during Holy Week forced worshippers to find other places to attend Easter services, and the Paris diocese invited them to join Sunday's Mass at the grandiose Saint-Eustache Church on the Right Bank of the Seine River.

Paris Archbishop Michel Aupetit handed over a bible that had been rescued from Notre Dame to the firefighters, who held a place of honour at Sunday's service.

Aupetit thanked city officials for their support amid "the drama" of last Monday's fire, and "especially you, those for whom this Mass is dedicated" -- the firefighters who struggled for nine hours to contain flames that consumed Notre Dame's roof and collapsed its spire.

He notably thanked fire service chaplain Jean-Marc Fournier, who saved the most precious thing for Catholics from the fire, the chalice containing consecrated hosts that for Catholics are the body of Christ.

Police and a soldier guarded the entry to Sunday's Mass, creating a long line to check bags before visitors could enter the 13th-century Saint-Eustache Church. It was unclear if the extra security was linked to an Easter Sunday attack on churches and hotels in Sri Lanka that killed at least 190 people and wounded nearly 500 others.

Notre Dame's parishioners were joined by Catholics and others from around France and beyond. An Associated Press reporter heard at least six languages being spoken in the crowd.

"Everyone is affected by what happened to Notre Dame," said Parisian Michel Ripoche. "Easter is a holiday we celebrate every year, all our lives. Clearly what happened at Notre Dame added to the importance" of today's service.

Peggy Godley, visiting from Chicago with her husband and two daughters, "wanted to see what it was like to celebrate a Mass in Paris."

"We didn't get to see Notre Dame. We were hoping to be there, but it's too late," she said.

Notre Dame isn't expected to reopen to the public for five or six years, according to its rector, although the French president is pushing for a quick reconstruction. Investigators believe the fire was an accident, possibly linked to renovation work.

Notre Dame Rector Patrick Chauvet told The Associated Press on Good Friday that he has "plenty of hope, because I believe that from this suffering there will be a renaissance."

He said he would fight for speedy rebuilding work.

Culture Minister Franck Riester said Sunday that most of the sensitive spots in the cathedral have been stabilized, including support structures above its prized rose windows.

"There remain some sensitive points in the vaulted ceiling, and so teams from the Culture Ministry, construction companies are working to remove the rubble that remains on the ceiling and progressively cover it up. And after that, we can say that the Notre Dame of Paris is saved," he said on France-2 television.