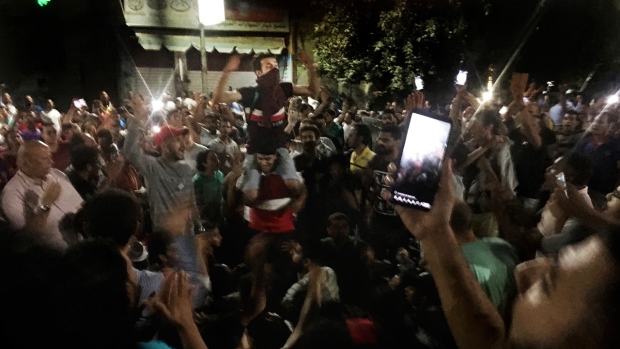 Protesters chant slogans against the regime in Cairo, Egypt, early Saturday, Sept. 21, 2019. Dozens of people held a rare protest in Cairo during which they called on Egyptian President Abdel-Fattah el-Sissi to quit. Security forces dispersed the protesters and no casualties were reported. (AP Photo/Nariman El-Mofty)

The former army general has overseen an unprecedented political crackdown, silencing critics and jailing thousands. El-Sissi came to power with the military's ouster of an elected but divisive Islamist president in 2013, amid mass protests against his one-year-rule.

In the capital, Cairo, dozens of protesters gathered Friday night near Tahrir Square, the epicenter of the 2011 pro-democracy uprising that toppled longtime autocrat Hosni Mubarak.

The protesters were responding to a call by a self-exiled businessman who claimed corruption by the military and government without providing evidence.

In viral social media videos posted over the past weeks, Muhammad Ali alleged his contracting business had witnessed the largescale misuse of public funds in the building of luxurious hotels, presidential palaces and a tomb for el-Sissi's mother, who died in 2014.

The allegations came as economic reforms and austerity have squeezed Egypt's lower- and middle-classes badly.

In a rambling speech on Tuesday, El-Sissi angrily dismissed the allegations as “sheer lies.” He portrayed Ali's videos as an attempt to weaken Egypt and undermine the public's trust in the military.

He said he would continue building new presidential residences for the good of Egypt. “I am building a new country,” he said.

The president also warned Egyptians against protesting or repeating the 2011 uprising.

On Friday, security forces speedily dispersed the scattered protests, which came directly after a soccer game between al-Ahly, Egypt's biggest team, and its archrival Zamalek.

No casualties were reported.

The willingness of the protesters to defy police and laws that all but ban public protests suggests Friday could be a turning point, however small.

“This is a very important development because this was the first such protest against the rule of el-Sissi,” said political scientist Mustafa Kamel el-Sayed of Cairo University. “The small demonstrations demolished the wall of fear installed by el-Sissi and that could lead to more protests in the future.”

The Egyptian Center for Economic and Social Rights said security forces reportedly rounded up at least four dozen people in Cairo and elsewhere in the country.

There were also small protests in other cities including the Mediterranean city of Alexandria.

“President al-Sissi's security agencies have time and again used brutal force to crush peaceful protests,” said Michael Page, deputy Middle East and North Africa director at HRW. “The authorities should recognize that the world is watching and take all necessary steps to avoid a repetition of past atrocities.”