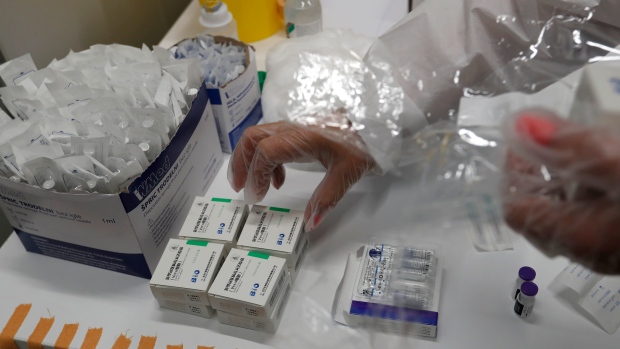 A medical worker prepares vials of the COVID-19 vaccines, Chinese Sinopharm, left, Sputnik V, center, and Pfizer at a vaccine centre, in the Usce shopping mall in Belgrade, Serbia, Thursday, May 6, 2021. Serbian authorities are looking for incentives for people to boost vaccination that has slowed down in recent weeks amid widespread anti-vaccination and conspiracy theories in the Balkan nation. The government has also promised a payment of around 25 euros to everyone who gets vaccinated by the end of May. (AP Photo/Darko Vojinovic)

MOSCOW - Russian authorities gave regulatory approval Thursday to a single-dose version of the country's Sputnik V vaccine, arguing that the move could accelerate the process of achieving herd immunity against the coronavirus.

Named Sputnik Light, the new version is identical to the first dose of the two-dose Sputnik V. The regulatory approval will allow it to be marketed and administered as a separate COVID-19 vaccine.

The jab, however, has yet to complete its own advanced testing needed to ensure its safety and effectiveness in line with established scientific protocols. Russia started human trials of Sputnik Light in January, and the studies are still ongoing, according to official records.

The two-dose Sputnik V will remain “the main source of vaccination in Russia,” said Russian Direct Investment Fund CEO Kirill Dmitriev, whose organization bankrolls the Sputnik shots. Sputnik Light will be exported “to our international partners to help increase the rate of vaccinations in a number of countries in the face of the ongoing fight with the pandemic and new strains of coronavirus,” he said.

Sputnik Light is the fourth domestically developed COVID-19 vaccine approved in Russia. Commenting on the decision to authorize it for use, President Vladimir Putin said Thursday, “It's nice to know that this range of tools (against COVID-19) is expanding.”

Russian Health Minister Mikhail Murashko said authorizing a fourth jab will help speed up the process of forming herd immunity against the virus. Most scientists believe at least 70% of a population needs to be immunized to achieve herd immunity against COVID-19, but the exact threshold is still unknown.

The Russian Direct Investment Fund's Dmitriev, said in a statement Thursday that “the single dose regimen solves the challenge of immunizing large groups in a shorter time, which is especially important during the acute phase of the spread of coronavirus, achieving herd immunity faster.”

Russia faced criticism last year for authorizing Sputnik V before advanced trials had even started and for offering it to medical workers while those trials were underway. The criticism was blunted by a study published in February in the British medical journal The Lancet, which said the vaccine appeared safe and 91% effective against COVID-19 based on a trial involving about 20,000 people in Russia.

Two other Russian vaccines - EpiVacCorona and CoviVac - also received regulatory approval before completing large-scale testing. No data on the efficacy of the vaccines has been released.

Despite having several vaccines available and being one of the first countries to start immunizing its population, Russia is currently lagging behind a number of nations in terms of its vaccination rates.

According to Deputy Prime Minister Tatyana Golikova, 13.4 million people in Russia, or just 9% of Russia's population of 146 million, had received at least one dose of a COVID-19 vaccine as of Thursday, while 9.4 million - 6% of the population- have been fully vaccinated.

Experts have questioned whether Russia will be able to meet the government's targets of vaccinating 30 million people by mid-June and nearly 69 million by August.