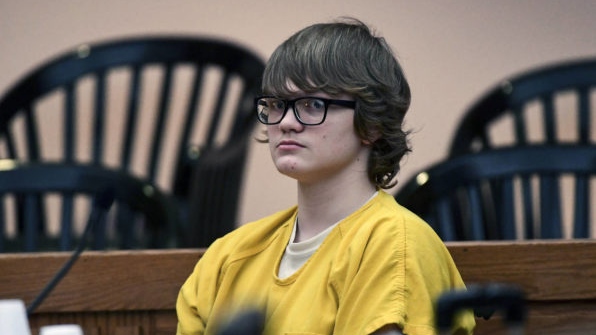 FILE - In this Feb. 16, 2018 file photo, Jesse Osborne waits for a ruling at the Anderson County Courthouse in Anderson, S.C. Prosecutors plan to tell a judge why Osborne, who fired on a South Carolina school playground and killed a first-grader should spend his life in prison. A hearing begins Monday, Nov. 11, 2019 at the Anderson County Courthouse to determine Osborne’s sentence. He faces 30 years to life without parole. (Ken Ruinard/The Independent-Mail via AP, Pool, File)

COLUMBIA, S.C. - Prosecutors seeking a life sentence for a teen who killed a first-grader on a South Carolina school playground showed a judge thousands of Instagram messages with him planning the crime.

A special hearing started Tuesday in Anderson County before a judge, who will decide 17-year-old Jesse Osborne's sentence .

The teen faces 30 years to life without parole. Osborne had just turned 14 when he also killed his father in their home before driving to Townville Elementary School and shooting at students outside in September 2016.

Osborne pleaded guilty as an adult to two counts of murder.

Osborne's Instagram group, which called itself “Project Rainbow,” debated whether it was better to shoot at an elementary school or middle school, settling on the elementary school because there was no on-campus police officer.