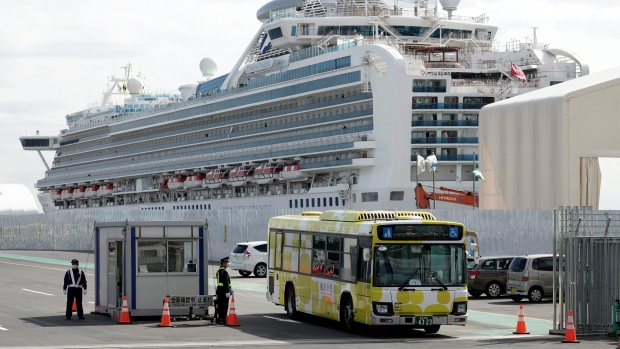 TOKYO -- A cruise ship passenger who had been hospitalized after testing positive for the new virus died on Sunday, the third fatality from the Diamond Princess, Japan's health ministry said.

The ministry also announced 57 more cases of infections from the ship, including 55 crew members still on board and two passengers who had infected roommates and are in a prolonged quarantine at a government facility.

With the new cases, 691 people have been infected on the ship, or nearly one-fifth of the ship's original population of 3,711. Japan has confirmed a total of838 cases including four deaths from the virus, which first emerged in China, including those on the ship.

The latest fatality is a Japanese man in his 80s who was among the first group of people developing symptoms when Japanese health authorities ordered a 14-day quarantine of the ship on Feb. 5, Masami Sakoi, a health ministry official, said at a televised news conference.

The man already had symptoms when the ship returned to Yokohama near Tokyo for the quarantine and was taken to a hospital, according to a ministry statement. The man was among the first group of people who tested positive, a ministry official said.

Three other people, all in their 80s, have died from the virus in Japan, including two former passengers of the ship.

Dozens of confirmed cases that continue to be reported from the ship have prompted criticisms and concerns that Japan's quarantine might have been inadequate. Japanese officials say they did their best given the challenging situation on the ship and the large number of people they had to deal with.

On Saturday, a former passenger in her 60s tested positive for the virus after getting off the ship and taking a train home. Her husband, who travelled with her, tested negative again.

More than 100 cases outside of the ship have been confirmed across Japan.

Abe said that Japan is at a crucial phase in preventing a widespread infection and that it is necessary to implement reliable and effective measures to stop the further spread of the virus.

Japan's health minister, Katsunobu Kato, speaking to reporters later Sunday, said the situation in japan is “just about to hit an acceleration phase.”