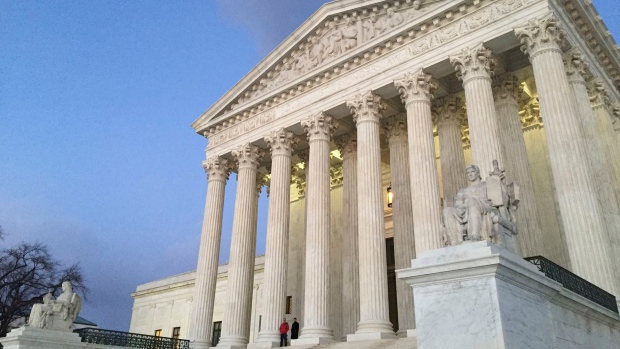 People stand on the steps of the Supreme Court at sunset on Saturday, Feb. 13, 2016, in Washington. (AP Photo/Jon Elswick)

WASHINGTON - A half-dozen experts on the U.S. Supreme Court weigh in on the historic battle that's about to erupt over control of the country's most powerful legal body.

The sudden passing of 79-year-old conservative stalwart Antonin Scalia has left a vacancy on the court, and several of his colleagues are over age 75, meaning the current presidential election could have repercussions for decades to come.

How important is the next appointment?

Jeffrey Lax, Columbia University: ”This is as high-stakes as it can get. Not only can many cases be flipped with the switch from a strong conservative even to a moderate, even a moderate conservative, but Scalia provides a lot of intellectual heft by reputation, if not always through consistency of argument. He works hard to shift policy to the right, and my work with Kelly Rader at Yale argues that such efforts matter a lot in bargaining over opinion content within the Supreme Court.”

Andrew Martin, Michigan University: ”The stakes are tremendously high. With the passing of Justice Scalia, we now have an evenly balanced court with four liberals and four conservatives. The next justice appointed will determine which group will have a majority for the foreseeable future.”

Ryan Emenaker, Brown University: ”It depends on the issue, and it depends on who is nominated. Over the last two years many of the court's decisions were unanimous. In 2013-2014, nearly two-thirds of the cases brought before the Court (65 per cent) were decided unanimously, which was a modern record; during the 2014-2015 term this number dropped to 40 per cent. Thus in many cases it is unlikely to see much change.”

What big national issues could be decided by the next court?

Chris Bonneau, University of Pittsburgh: ”In this term, cases on environmental protection and affirmative action are on the docket. Abortion, gun rights, and campaign finance are perennial issues. Moreover, a shift in the liberal direction could encourage cases from people who previously would think they would not win.”

Thomas Clark, Emory University: “”Many of the most important political issues before the court right now, including abortion, campaign finance, and gun control often touch on typical ideological divisions. If the ideological balance on the court shifts to the left, there will be a lot of pressure from progressives for the court to take up issues that the court has treated conservatively in recent years.”

Andrew Martin, University of Michigan: ”There are many significant issues before the court right now, including the death penalty, environmental regulation, affirmative action in higher education, and abortion, to name just a few. For current cases pending before the court, if there is a 4-4 tie the lower court ruling is affirmed without establishing precedent. Going forward, the next justice will surely play an important role in how these issues are resolved.”

Ryan Emenaker, Brown University: ”Abortion and affirmative action ... will be effected even before a new justice is appointed. (For the next term) voting rights... could also matter as could campaign finance laws. This term there are issues of presidential power related to immigration and climate change that also might (change).”

Some conservatives have already demanded that the Senate not confirm anyone before the election. Is this a normal tactic - keeping a court vacancy for 11 months just because there's a presidential election coming?

Thomas Clark, Emory University: ”It is hard to say what is normal because this kind of situation is so unusual - for a lame-duck president to have an opportunity to nominate a Supreme Court justice. The most well-known, and recent, example is from 1968, when Earl Warren announced his retirement in June. President Johnson had already announced he would not be running for re-election, which was then only five months away. However, Johnson nominated Abe Fortas, who was an associate justice on the court, to be Chief Justice. The Senate blocked the nomination, with Republicans and Southern Democrats supporting a filibuster... President Nixon won the election in the fall, and when he took office in 1969, he nominated Warren Burger.”

Thomas Keck, Syracuse University: ”It's not a normal tactic, because... vacancies during presidential election years are unusual, but there is precedent, most recently in 1968.”

Chris Bonneau, University of Pittsburgh: ”This would be a long time for a vacancy to be unfilled - though certainly not the longest in history. Moreover, conservatives would be more likely to get a more moderate nominee from President Obama now than they would from a President Clinton/Sanders if they win in 2016. So, it's a risk. If the Republicans think they can win the White House, they should stall. But, if they think there's a decent chance they won't win, they may end up with a better justice now, from an ideological perspective.”