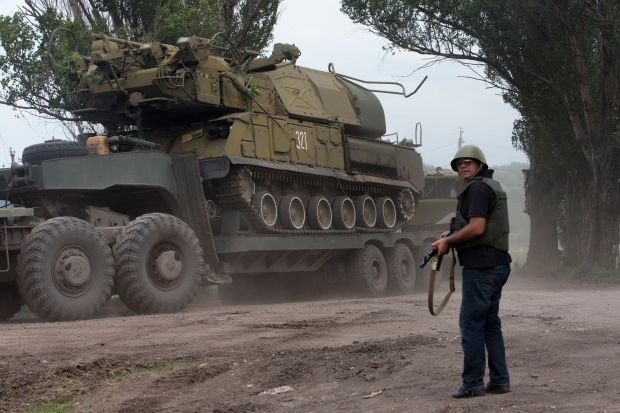 Ukrainian President Petro Poroshenko said Ukraine was ready to conduct another round of talks between representatives from Ukraine, Russia and the rebels on Saturday, but didn't name their venue. Two previous rounds of such negotiations held during a 10-day cease-fire have yielded no visible progress, but they brought the warring parties together for the first time.

Moscow strongly pushed for extending the truce and holding more talks in an apparent hope to negotiate a settlement that would allow it to secure a degree of influence over the neighbour. The continuing fighting is putting more pressure on Russian President Vladimir Putin, who has been facing increasingly angry nationalist demands to send troops to help the insurgency -- a move that would inevitably trigger crippling Western sanctions.

The two neighbours, who share a 2,000-kilometre (1,250-mile) border that is unmarked and unguarded outside of a few checkpoints, have been trading claims and counterclaims ever since Ukraine began fighting pro-Russia separatists in April.

The government said nine troops were killed and 13 others were wounded in Friday's fighting in the east, according to the Interfax news agency. It did not elaborate on where or how the deaths occurred.

Valentyn Nalyvaychenko, the head of Ukraine's SBU security service, told journalists that over the past four days 20 Russian tanks or armoured vehicles had illegally crossed the border to take part in the insurgency.

Ukraine says Russia is arming and supporting the separatists, a charge that Russia denies. For its part, Moscow has repeatedly accused Ukrainian troops of firing shells that landed on the Russian side and on one occasion last month hit a Russian border post, wounding one customs officer. Russian border guards said 10 artillery shells flew from the Ukrainian side Friday, but no one was injured.

It is nearly impossible to prove or dispel the claims from the opposing sides, since the fighting consists of intermittent clashes between small units with no fixed front line and it is deadly dangerous for journalists and other observers to travel around. Five journalists have been killed covering the conflict and several teams of observers from the Organization for Security and Cooperation in Europe have been kidnapped by rebels.

Russia has proposed hosting both OSCE observers and Ukrainian officers at its border checkpoints to prove it wasn't fueling the mutiny.

The Russian Foreign Ministry on Friday accused Poroshenko's government of dragging its feet on holding another round of negotiations to resume a truce and accused it of using cluster munitions against civilians.

Parubiy said government forces were attacking rebel positions in eastern Ukraine with artillery and planes and that 17 villages had been recaptured since a unilateral cease-fire expired Monday. He said Ukrainian forces now controlled 23 of the 36 local regions within the Donetsk and Luhansk provinces that have declared independence.

"Maybe they occupied 17 villages of some sort, but there wasn't a single militia fighter there," he said.

Both sides' claims of enemy losses have proven exaggerated in the past, however.

Rebels also shelled the Donetsk airport overnight, and an AP reporter who visited the site saw a radar or communications tower there still burning Friday.

The mutiny in eastern Ukraine, which erupted in mid-April after the ouster of the nation's pro-Moscow president and the subsequent Russia's annexation of Crimea, has killed more than 400 people, according to the United Nations.

The crisis in Ukraine has strained ties between Russia and the West to a degree unseen since the Cold War, prompting NATO to consider long-term responses to Moscow's apparent new willingness to flex its military might.

To that end, NATO and Russia both launched navy exercises Friday in the Black Sea.

NATO's drills in the western part of the Black Sea just a few hundred miles from Ukraine's coast involve ships from the U.S., Bulgaria, Greece, Romania and Turkey. They were to continue until July 13.

Russia's Black Sea Fleet fielded about 20 ships and more than 20 aircraft for its manoeuvrs, which included missile launches at practice targets.