A mother and her daughter were taken to a Toronto hospital after a two-alarm fire broke out in an apartment building early Friday morning.

Firefighters were called to a building on Sam Romanoway, near Jane Street and Finch Avenue West, to extinguish a blaze that was reported shortly before 1:30 a.m.

Fire crews were able to put out the blaze before it could spread to other suites.

The mother and daughter were taken to hospital to be treated for minor smoke inhalation, police told CP24.

The fire's cause remains under investigation, but it is not believed to be suspicious in nature. 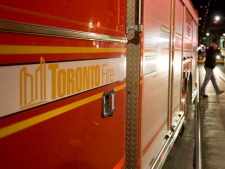