Arrest made in city's latest murder

Police have made an arrest in connection with the city's latest homicide in Toronto's east end.

Emergency crews were called to the Queen Street East and Kingston Road area at about 7:20 p.m. Monday after shots were fired.

Benjamin Brefo, 29, was found with multiple gunshot wounds and taken to hospital, but later succumbed to his injuries.

Brefo was the father of a young child.

Haitham Abdelwahab, 28, has been arrested and charged with second degree murder in connection with his death.

Abdelwahab suffered gun shot wounds during the course of the shooting and took a taxi from the scene in order to receive medical treatment.

He was arrested out of the jurisdiction Tuesday.

Detective Sgt. Kim Gross says police are still trying to determine the relationship between Breefo and Abdelwahab as well as what the two men were doing in the area Monday evening.

Police also hope to speak to the driver of the taxi that picked Abdelwahab up at the foot of Kingston Road. 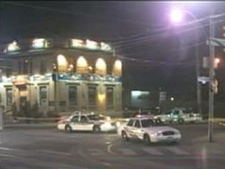 Police at the scene of a shooting near Queen Street East and Kingston Road on Monday, March 28, 2011.