Arson may be cause of St. Clements Avenue inferno

Arson may be the cause of Thursday's massive fire that destroyed a St. Clements Avenue house that was under construction.

Toronto police say a surveillance camera in the area recorded footage of two males running from the house shortly before the fire was noticed at about 2:30 a.m.

It took fire crews about three hours to bring the flames under control.

No serious injuries were reported.

Several other homes sustained significant damage in the three-alarm blaze.

Neighbours reported explosions, believed to be propane tanks, as the home burned.

Witnesses estimated the flames extended about 15 to 30 metres into the air at the fire's peak, resulting in several homes being evacuated. 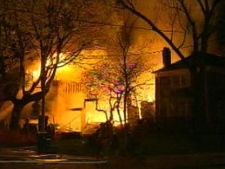 A house under construction on St. Clements Avenue was destroyed in an early-morning fire Thursday, May 5, 2011.