Bono will be in NYC for 9-11 anniversary

TORONTO - As the 10th anniversary of the Sept. 11 terror attacks draws near, U2 frontman Bono admits he's "a very proud American on 9-11."

"It's just too big a moment in all our lives," Bono said. "Even if you're not American, everyone became an American that day."

The Irish-born rocker made the comments on the red carpet for the U2 documentary "From the Sky Down," which opened the Toronto International Film Festival. The film chronicles the band's recording of their seminal 1991 album, "Achtung Baby."

Bono will be in New York on Sunday with his wife Ali Hewson for a fashion event promoting a men's collection for their EDUN line. The couple launched the not-for-profit fashion company in 2005 to raise awareness for business opportunities in Africa. 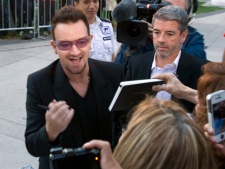 Bono greets fans as he arrives for the gala screening of "From the Sky Down" at the Toronto International Film Festival on Thursday, Sept. 8, 2011. (THE CANADIAN PRESS/Frank Gunn)