OTTAWA - The first batches of medical isotopes to come out of the Chalk River nuclear reactor in more than a year should start arriving at clinics within days.

Atomic Energy of Canada Ltd. said the Ontario reactor is making isotopes again after a 15-month shutdown. The company expects to ship the first batch of isotopes later this week.

"We've begun to create isotopes and we're working to get the first shipment out," spokeswoman Robin Forbes told The Canadian Press.

A status update posted Tuesday on AECL's website said the National Research Universal reactor at Chalk River, Ont., is back at full power.

"AECL reports that it has concluded low-power testing on the NRU reactor," the company said in a statement.

"As a result, the reactor is now operating at high power and can begin to create medical isotopes."

The 53-year-old reactor supplied a third of the world's medical imaging isotopes until AECL shut it down in May 2009 after discovering a pinhole-size radioactive water leak.

Doctors have been scrambling to make do with an erratic supply of medical isotopes to diagnose cancer and heart ailments.

"It's been quite difficult," said Dr. Jean-Luc Urbain, head of the Canadian Association of Nuclear Medicine.

"Usually Mondays and Tuesdays, we cope quite well. And then Wednesdays, Thursdays and Fridays it's all but abysmal in terms of the number of studies that we're able to do."

Urbain expects a spike in patients with cancer and heart problems, because doctors couldn't run as many tests with isotopes in short supply.

"We most likely are going to see an increase advanced cardiovascular diseases and cancer, just because we didn't have the tools, the isotopes, to make the diagnosis," he said.

What was originally supposed to be a month-long shutdown dragged on for more than a year. It fell to a handful of other reactors around the world built a half-century ago to supply medical isotopes.

The loss of the Chalk River supply was exacerbated by the fact that the Petten reactor in the Netherlands, which supplied another third of the world's supply, has also been out of production for months.

That left smaller reactors in Belgium, France and South Africa to carry the load.

But the smaller French and Belgian reactors are scheduled to be shut down for maintenance for most of September, Covidien said.

Covidien warned customers of a "significant" isotope shortage through the last week of August and the first week of September. The company expects to fill all its orders again by mid-September.

The Conservative government has ruled out building a new reactor to replace the one at Chalk River -- even though its own expert panel recommended doing just that.

The Tories will instead spend $35 million to find ways to make isotopes without a nuclear reactor. Another $13 million will be spent to find better ways to use the existing supply.

But Urbain said he's concerned about the Chalk River reactor breaking down again.

"It's like an old car. It can break down at any time." 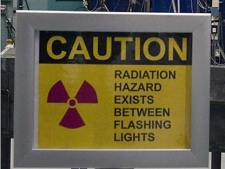