Support staff at Ontario's 24 community colleges went on strike early Thursday morning after last-ditch talks between their union and management failed, just days before the start of a new school year.

Despite the strike, the colleges are vowing to stay open and resort to contingency plans to keep classes going during the labour strife.

In his speech to the crowd, OPSEU president Warren (Smokey) Thomas lumped the blame on the colleges' management.

"I'm saying today it's the employer's fault. It's not your bargaining team, it's not you," Thomas told the crowd. "If (management) truly valued you they wouldn't be seeking the things they are seeking."

The labour dispute is causing a lot of stress for students, who are scheduled to begin the school year next week.

Union officials previously said negotiators had agreed on some things since contract talks began last June, but the major sticking points were wages and job security.

Gerry Barker, chair of the colleges' bargaining team, said the colleges offered increases that would hike the average salary for support staff to $59,000 a year with no concessions.

In a news release, barker said the union is striking over wage and benefit demands that the colleges cannot afford.

Meanwhile, striking employees in Whitby and Oshawa received a boost from Ontario Federation of Labour president Sid Ryan, who walked the picket lines with them at Durham College campuses in those communities.

In a news release, the OFL said the employees and their union were forced into a strike position by proposed concessions that would create a two-tiered workforce, threaten job security and cut wages and benefits of future employees.

The OFL represents 54 unions, including OPSEU. 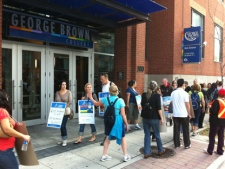