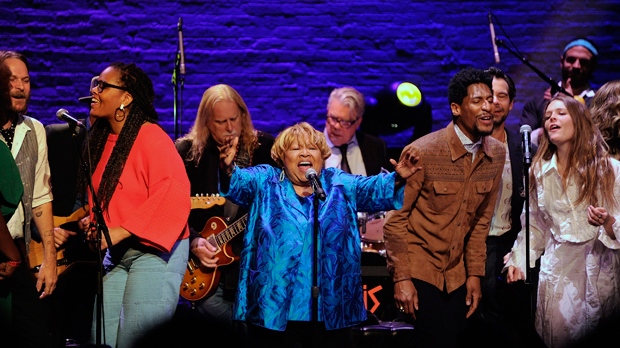 Singer Mavis Staples, center, performs at the Apollo Theater to celebrate the release of her new album "We Get By," on Thursday, May 9, 2019, in New York. (Photo by Brad Barket/Invision/AP)

NEW YORK -- Her fans stood and cheered from the moment Mavis Staples appeared on stage and stayed on their feet until she left. They sang “Happy Birthday” and joined in the chorus of “I'll Take You There.” Couples embraced and held hands as if caught up in the warmth and spirit of a singer who never failed to hug her many guest performers.

“All of my friends have come to help me,” she called out as she welcomed David Byrne, Norah Jones and Maggie Rogers among others for a nearly 90-minute show. “You're talking about one happy girl.”

With enthusiasm to be envied at any age, Staples told stories and pumped her fists and danced in place as she sang, shouted and sometimes roared through “I'll Take You There,” ”The Weight“ and a mix of rock and gospel songs. Staples had knee replacement surgery a few years ago, but only briefly did she sit down or even acknowledge the boundaries of age, joking ”She wore me out“ after a hot duet with Valerie June on ”High Note.“ Byrne joined her for Talking Heads' ”Slippery People,“ and Jones added keyboards and vocals for ”You Are Not Alone.“ Stephen Colbert bandleader Jon Batiste took over on keyboards for ”I'll Take You There.“

Staples was first known as a member of the Chicago-based Staple Singers, featuring her father, Roebuck “Pops” Staples and siblings Cleotha, Yvonne and Pervis. They were deeply involved in the civil rights movement, starting from the time the family saw the Rev. Martin Luther King Jr. speak at a church in Birmingham, Alabama. Introducing their classic “Freedom Highway,” Mavis told the Apollo crowd that back at their hotel, “Pops” told his children “If he can preach it, we can sing it.”

Staples remembered “Pops” teaching her the hymn “Will the Circle Be Unbroken?” She also recalled the first time she ever stepped inside the Apollo, in 1956. Her family and friends didn't believe she had gone.

“We didn't have those little telephone cameras, so I couldn't prove it,” she said, as hundreds in the audience held up phones and recorded her.