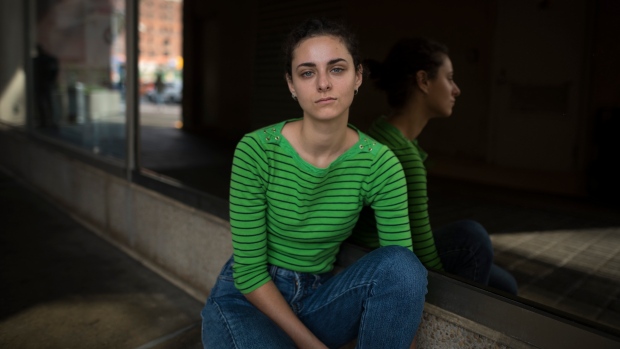 Actress Nahema Ricci poses for a photograph to promote her film "Antigone' during the 2019 Toronto International Film Festival in Toronto on Wednesday, September 11, 2019. THE CANADIAN PRESS/ Tijana Martin

MONTREAL - Quebec writer-director Sophie Deraspe says she's proud that her film has been chosen as the “Canadian ambassador” in the leadup to the 2020 Academy Awards.

Telefilm Canada announced Friday that Canada is putting forward “Antigone” to vie for a nomination in Oscars' best international feature film category, which used to be known as best foreign language film.

Deraspe said she sees the recognition not only as an endorsement of her craft, but also of the ideal the film espouses.

“Antigone is also a film about values. Values of sympathy, integrity, love,” the Montreal filmmaker said by phone after Friday's announcement.

“I feel proud of... campaigning not only for film, for the art of filmmaking, but also those values.”

A modern revisioning of Sophocles' Greek tragedy, the Montreal-set drama centres on Antigone, played by newcomer Nahema Ricci, a teenager caught in a clash between her moral code and Canada's justice system when tragedy strikes her immigrant family.

Deraspe, who wrote and directed the film, said the story represents the power of the individual to shatter the “immovable wall” of the system.

“It's about a young woman who has no power in terms of what is power in our world ... and she stands against authority because of what she believes,” said Deraspe, whose 2015 credits include the documentary “The Amina Profile” and the feature “Les Loups.”

“That's what the film wants to carry - that OK, there's this big system above us, but we are those that are powerful deep inside.”

Since then, Deraspe said she's been fielding calls from American film agents offering to help her break into Hollywood.

While she's interested in the opportunity to expand her cinematic reach, the 45-year-old said moving to Los Angeles wasn't really her “dream.”

“We can bring out something to an audience that resonates more than just for fun or adventure, and in that way, yes, I'm proud of my country and I'm proud of being the ambassador.”

“Antigone,” which hits theatres in Quebec on Nov. 6, is competing against films submitted by dozens of other countries, including two Canadian co-productions, in the race for an Oscars nod for international feature.

A short list of 10 films will be unveiled on Dec. 16, and the chosen five official nominees will be announced on Jan. 13.

Palestine is entering Elia Suleiman's “It Must Be Heaven,” co-produced by Canada, Palestine, Qatar, Turkey and France.

Cuban-Canadian co-venture “A Translator” by Rodrigo Barriuso and Sebastian Barriuso will represent Cuba in the race.

- By Adina Bresge in Toronto