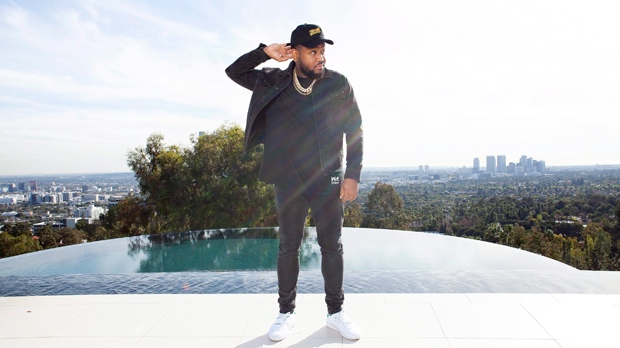 Boi-1da poses for a portrait in Los Angeles on Jan. 24, 2019. A spokesman for a city east of Toronto says the mayor will be meeting with famed producer Boi-1da next week to discuss his and frequent collaborator Drake's complaints about slow internet service. THE CANADIAN PRESS/AP, Rebecca Cabage-Invision

PICKERING, Ont. - The mayor of a city east of Toronto will be meeting with famed producer Boi-1da next week to discuss his and frequent collaborator Drake's complaints about slow internet service, a municipal spokesman says.

Drake posted an Instagram story earlier this week calling on the mayor of Pickering, Ont., to bolster the city's wireless network so resident Boi-1da can send him new beats for music they're trying to “cook up.”

In response, the City of Pickering defended its efforts to improve Wi-Fi access Wednesday in a tongue-in-cheek social media note that featured a slew of references to Drake's songs.

“We're ... working on expanding and strengthening Pickering's broadband network so there will be fast and reliable internet service whether it's in Matt's crib or Marvin's Room,” the city wrote.

Boi-1da, born Matthew Samuels, shot back in an Instagram story that he wasn't looking for a “rap battle,” but wants officials to address poor internet connection throughout the region.

“This is an issue that has been going 10-plus years with no resolve,” he wrote. “I'm serious about my business, my music and my money, and what we have been given is not sufficient.”

The municipal spokesman who authored the city's response said the post was meant to be in good fun, but Boi-1da raises a serious issue.

“It went viral, but it brought attention to an important matter, and it was kind of an entry point to this dialogue,” said Mark Guinto, Pickering's manager of business development and public affairs.

“Our position as a city is that broadband should be considered a public utility.”

Despite being next to Canada's largest metropolis, many of Pickering's rural residents don't have access to a fast and reliable internet connection, said Guinto.

He said the city has been working to address the issue by expanding public Wi-Fi and installing new conduits, but needs federal funding in order to build up its wireless infrastructure.

Guinto said Boi-1da is an example of why businesses need Wi-Fi access to compete in the global economy.

“He is a Grammy Award-winning producer. He's sold millions of records through all the international artists he's worked with,” said Guinto, citing famous collaborators such as Rihanna, Nicki Minaj and Eminem.

“He doesn't necessarily have to go fly to wherever they are, but (he wants) to be able to work out of his studio in Pickering, in Canada.”

“We're definitely not beefing,” he said. “I think when they posted, he was frustrated and Drake was frustrated, but it's more of a collaborative thing right now.”