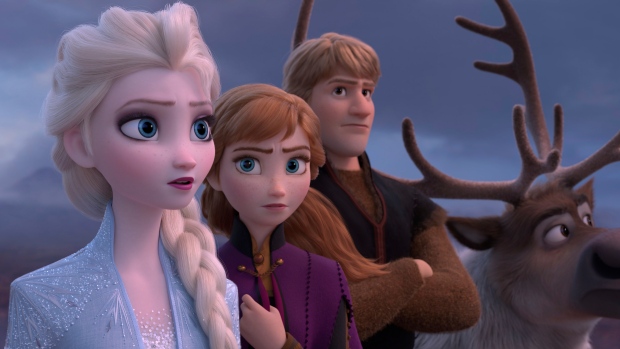 This image released by Disney shows Elsa, voiced by Idina Menzel, from left, Anna, voiced by Kristen Bell, Kristoff, voiced by Jonathan Groff and Sven in a scene from "Frozen 2." (Disney via AP)

TORONTO - With swirling autumn maple leaves and icy landscapes, the Canadian animators on “Frozen 2” were immersed in a familiar world while working on the highly anticipated Disney sequel.

There's a strong Canadian contingent behind the second instalment in the blockbuster animated musical film franchise, which stars Idina Menzel as Elsa, queen of Arendelle who has magical ice powers she's trying to control, and Kristen Bell as her plucky younger sister, Anna.

The story's setting is inspired by Norway but at times resembles Canada in its fall and winter wilderness.

“Seeing those maple leaves, I have to say it really transported me back to my Canadian roots,” said Jackie Koehler, a Calgary-raised animator on the film.

Quebec City-reared Normand Lemay, who was head of story on the film, said his heritage was an asset as he worked on both the two-time Oscar-winning original “Frozen” and the sequel at the California-based Walt Disney Animation Studios.

“I asked (co-director) Chris Buck when he was working on it, 'Why was I cast in this movie?' And I think at some point he was just saying, 'Well you're from the north, you know that lifestyle,”' said Lemay.

“It kind of took me by surprise but that's true. There are certain things, when you live in a northern country, that you would think of first. I do feel connected with the cold and how you would behave in it.”

Other Canadians who worked on “Frozen 2,” which hits theatres Friday, include Montreal native Christophe Beck, who did the score.

Another element that may resonate with Canadians is the Indigenous reconciliation theme. It happens while Elsa is exploring their family roots and trying to figure out why she has magical powers.

Her journey to seek the truth is guided by a mysterious voice that's singing out to her from far away and leads her into an enchanted forest. Following her is Anna and her boyfriend Kristoff (played by Jonathan Groff), goofy snowman Olaf (played by Josh Gad), and Sven, the non-speaking reindeer.

California-based Lemay said the storyline was inspired and informed by the Sami Indigenous people of Scandinavia.

“We were really trying to stay as authentic as possible, to never try to impose things just for the story's sake, to have it come from a real place, any type of history or even mannerisms.”

Overall the sequel, which is set three years after the first film from 2013, takes on a more mature tone and explores themes of maturation and transformation.

As the sisters try to figure out their identities in their early 20s, Elsa is also trying to save her kingdom from a looming threat.

There's rampant speculation online about Elsa's sexual identity, but that isn't revealed in the film.

“It's more about her strengths and her commitment to her family, so it's not necessarily serving the story for us to delve into that sort of information.”

Koehler's work on the film included one of the biggest sequences, involving Elsa singing “Into the Unknown.” She also helped create the Nokk, a magical water/ice horse that “was a huge collaborative effort between multiple departments.”

“It's probably one of the more challenging things I've ever animated,” said Koehler.

Water plays a prominent role in the new film and is depicted in spectacular fashion, with crashing waves and a roaring ocean that seems incredibly realistic.

Koehler said Disney Animation Studios “as a whole has become a lot more collaborative” since the first “Frozen.”

“There are a lot of barriers that were broken down between departments,” she said.

“So my department in animation, we work very closely with effects and lighting and technical animation down the road, but they're very separate departments. So being able to communicate more freely and having better rapport between those departments was a really big asset on this film.”