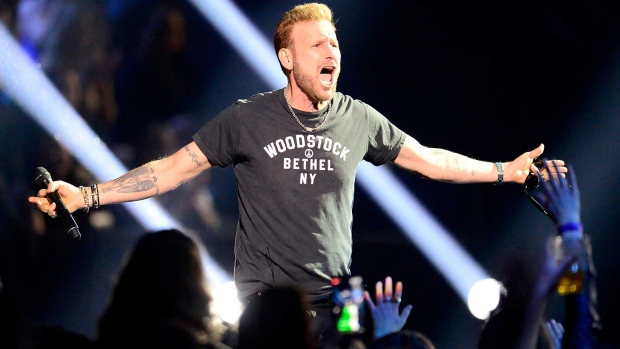 LONDON, Ont. - Corey Hart didn't call it a comeback, but at the Juno Awards on Sunday the 1980s hitmaker proved his lengthy break from performing hasn't stalled his stage presence.

The “Sunglasses at Night” singer-songwriter delivered an emotional speech thanking his family and fans as he was inducted into the Canadian Music Hall of Fame on the broadcast.

“I believe music and love are the most enduring and powerful forces of good in the world,” Hart told the crowd after throwing his fist in the air, with tears in his eyes, on the Junos stage in London, Ont.

“Without you, my songs would have no home, and they would ultimately be unrequited and empty.”

Hart then closed out the Junos with a performance straight out of a retro playlist. He started with his ballad “Never Surrender” on piano, before jumping behind a microphone stand - and sliding on his sunglasses - for a vibrant take on his timeless pop hit.

The performance capped off a diverse showcase of Canadian talent hosted by Sarah McLachlan that saw a list of marquee winners, including Shawn Mendes, Jessie Reyez and Arkells.

Mendes was the biggest winner as he picked up album of the year - which added to the four Junos he won in a pre-telecast ceremony held on Saturday.

But he wasn't able to attend the event because he's in the midst of a European tour.

However, the pop superstar didn't sit out the show entirely. The Junos included a pre-recorded performance of “In My Blood” taped in Amsterdam on March 4, where he jokingly told the audience to “try to sound Canadian.”

Hamilton-founded rock act Arkells won group of the year before performing their rousing track “Hand Me Downs” amid a steady rain of confetti.

A message of unity and love carried throughout the broadcast, which opened with Loud Luxury, the DJ pair who met at the city's Western University. They welcomed the school's marching band and cheerleaders to kick off the show with a bombastic performance of their dance hit “Body.”

“You know when you live someplace peaceful and beautiful, and then you get a crazy neighbour?” McLachlan asked the crowd.

“And they start causing all sorts of trouble, like putting up weird walls, picking fights with all the other neighbours?”

McLachlan added that she hoped that neighbour would be gone by 2020, and shifted the conversation to a lighter place saying that music is “reminding us that we're all in this together.”

Last year's breakthrough artist Reyez brought home her second Juno for R&B/soul recording of the year, and thanked her Colombian-immigrant parents for their support.

“I feel like I'm really grateful that my parents chose Canada and I feel like there's open arms here, and it's very apparent,” Reyez said backstage.

“If I was raised somewhere else, or born somewhere else, I feel like I wouldn't have been as encouraged to wave both flags - but in Canada you wave your parents' flag and you wave the Canadian flag.”

Jeremy Dutcher performed “Sakomawit” from his album “Wolastoqiyik Lintuwakonawa,” underneath black and white photographs of his Wolastoq ancestors.

Dutcher won the Indigenous music album award at a Saturday pre-telecast gala for his project, which has him singing with recordings of his elders made more than a hundred years ago.

Backstage, Dutcher spoke about the thrilling experience of performing in the Wolastoq language on national television.

“Representation. These bodies on stage. I didn't see that (growing up), so it gives me hope for what's to come. Because kids now can go and see queerness, see Indigeneity, can see all of these beautiful diverse things on a stage - what kind of possibilities does that breathe into a life?”

Corey Hart gestures after being inducted into the Canadian Music Hall of Fame at the Juno Awards in London, Ont., Sunday, March 17, 2019. THE CANADIAN PRESS/Frank Gunn