Missy Elliott on writing for Aaliyah, Beyonce and herself 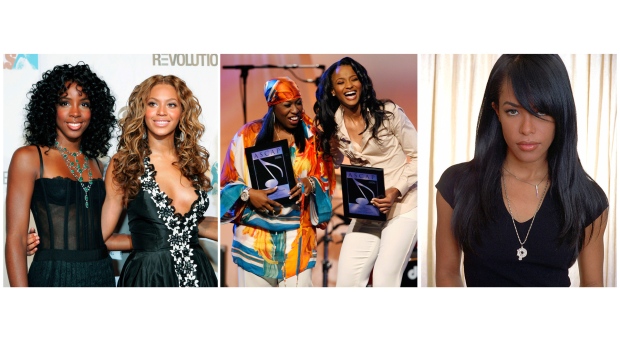 This combination photo shows, from left, Kelly Rowland and Beyonce Knowles of Destiny's Child at the Fashion Rocks concert in New York on Sept. 8, 2005, Missy Elliot and Ciara accepting their awards at the ASCAP Rhythm and Soul Music Awards in Beverly Hills, Calif., on June 26, 2006 and R&B singer and actress Aaliyah in New York on May 9, 2001. Elliott has a history of writing and producing some of pop music's most creative and catchy songs, not just for herself, but for groups like Destiny's Child and the late Aaliyah. (AP Photo)

NEW YORK - Missy Elliott, who has a history of writing and producing some of pop music's most creative and catchy songs, breaks down some of the hits she's written for herself and other stars. Elliott is one of the nominees for the 2019 Songwriters Hall of Fame.

AALIYAH, “ONE IN A MILLION”

Aaliyah had been coming off the major success of her 1994 debut album, the R. Kelly-produced “Age Ain't Nothing But a Number,” when newcomers Missy Elliott and Timbaland were called in to work on ONE song with the R&B goddess.

But one song turned into eight, and “One In a Million” - the song and the album - was born.

“I was scared. I don't know if Tim was scared when we first played it because it was a different sound. It was a different way to attack records because people were really singing then; that world of rap-singing didn't really exist,” Elliott explained. “Because I wasn't really a singer like that, that's why I wrote like that, because I was a rapper, but I didn't know how to do a bunch of runs, so every record that I would attack, I would attack it like I'm rap-singing it.”

But Aaliyah loved the song and appreciated Elliott and Timbaland's unique style.

“She had an ear and she knew what that music made her feel like. She was next level to understand that this is some next level (music). This is not just the sound that's going on right now - this is a new sound that is being created. This whole movement is new,” Elliott said.

Elliott and Timbaland would go to form a special bond with Aaliyah that was unmatched - as heard on “One In a Million” and its follow-up “Aaliyah,” released a month before Aaliyah died in 2001.

Elliott says although “One In a Million” topped the R&B charts, radio didn't want to play the song at first.

“(Radio) said they couldn't blend it in, they couldn't mix it in with records before it or after it because the cadence hadn't been done before,” she said. “And so somehow, I think her uncle spoke to some people and they end up playing it. I know (Funkmaster) Flex was one of the first people to break that record in New York. ...It was a headache at first.”

That may sound like a surprise since “Hot Boyz” set a record when it spent 18 weeks at No. 1 on Billboard's rap songs chart. And since 1999, Drake and Iggy Azalea have been able to match the feat, but no one has outlasted Elliott's hit.

“I remember one of the stations in L.A. was the first to pull it,” she said. “And something happened, I can't tell you what happened, but whatever happened, it ended up back at the stations ... and it ended up in the Guinness Book of World Records.”

The upbeat, hard-hitting song, which featured rappers Nas, Eve and Q-Tip, was one Elliott wanted to create not only for her die-hard female fans, but her male fans, too.

“I want guys to feel like they could ride around and listen to this because the beat was so hard. This beat feel like all the male rappers would want to get on this joint right here,” she said.

“Lisa (”Left Eye“ Lopes) really wanted it, she really wanted that record, but I guess, if it's two against one (what can you do?)” So I ended up giving that record to 702, which was cool because they were a group. I knew whoever had it, I wanted it to be going to a group.“

Of the biggest songs of 1999, “Where My Girls At?” was ranked No. 11 by Billboard. Elliott said she wanted women to feel empowered when they heard the fun track.

“It's almost like church - when you go to church, pastor is saying something (and you're) like, 'I swear up and down that message is for me.' I wanted to create something women could feel like, 'I could relate to this record.”'

Elliott's debut single, “The Rain (Supa Dupa Fly),” goes down in history as one of the most creative, unique and impressive songs of all-time.

But Elliott said she created the song - and her first album - in an agreement to get her own label so she could sign artists and produce for them.

“Of course, those were my smoke days, you can tell by the first line. I just went in and I just said whatever I felt. Back then, there was no expectation, so it wasn't like I had to really think and say, 'OK, I have to make something better than what I did the last time. This was my first time going in, so it was like, whatever the music made me feel, I said it,” she said.

Elliott and Timbaland finished her platinum-selling album, released in 1997, in just two weeks.

“That's how quick I wanted to hurry up and get my label deal. I would do songs five songs a day, so it was nothing. This was before people even knew who I was,” she said.

Elliott knew Destiny's Child would be big before they blew up.

She worked on the song “Confessions,” from the group's sophomore album “The Writing's on the Wall,” which gave them their pop star breakthrough.

“They all had something special. And Beyonce, she knew exactly how to attack a record,” Elliott said. “When I heard Bey singing the verses, I was like, 'Oh they finna go far.”'

The groovy song, about a woman cheating on her partner and confessing the truth, was one Elliott wrote specifically for the group after they reached out to work together.

“And it's funny when I think back on it because you rarely get women having to confess. It's always the guy who ends up having to confess,” Elliott said. “That was a different kind of twist for a female to be like, 'Look, I basically kicked it with Mike when you was gone, this went down and that went down.”'

MISSY ELLIOTT, “GET UR FREAK ON”

After Elliott created most of the music for her third album, “Miss E... So Addictive,” she felt like she was missing something. But Timbaland felt she was overanalyzing the situation.

“By this time, he's annoyed. He just happened to be in front of the keyboard and he starts just pressing the buttons on the keyboard but he when was doing it, he was mad,” she recalled. “He begins to create around this sound.”

It kicked off the sound for what later became “Get Ur Freak On,” the album's first single and a monster hit for Elliott. It won the best rap solo performance Grammy, beating out Jay-Z, DMX and Nelly.

“I'm always a headache to Timbaland. He has to take vacations after we're done with my album because I stress him out,” she said.

“I miss those days. ...there was a time where you didn't have to be a feature on the record, you just support,” she said. “I tried to gather if people were in town like, 'Hey, come through' and they always showed up. I'm humbled by that.”

Missy Elliott hadn't even met Ciara when she created “1, 2 Step” for the star.

Elliott was busy working her own music and hadn't heard Ciara's debut hit, “Goodies,” when she was asked to write a song for the budding singer.

“Back then people weren't really sing-rapping. Now that's the thing. But I wanted it to be where she still kind of rap-sings it. It allowed her to be able to dance, so she's not sitting there trying to do all these runs and sing and all that stuff, because you can't really get off when you trying to sing and then you trying to do the whole matrix thing going backward,” she said, referring to Ciara's skilled dancing.

The two went to collaborate on more songs, even winning a Grammy together for “Lose Control.”

“When you have that kind of chemistry, you're going to always work together,” Elliott said.

The hook of Elliott's “Work It” features a famous line where the lyrics are played in reverse.

She said it was a happy accident.

“The reverse thing, that was a mistake. The engineer happened to hit something, and it just went backward, and I was like, 'Oh that's kind of crazy because it went backward on the beat. So, after that happened, I said, 'Yo, keep that in there and I'm going to write around it.”'

The internet in 2002 went crazy - in today's world it would have been a viral moment - as fans tried to figure out what Elliott was saying in the song. Some thought it was a secret code or message.

“They thought I was saying all kinds of nasty stuff,” she said. “No, actually, I'm not, this time.”

“Work It” was the first single from Elliott's fourth album, “Under Construction,” which earned a Grammy nomination for album of the year.

She said Timbaland really challenged her to write something great on “Work It.”

“I don't record in front of anyone, so I went in another room and recorded, and I felt like a little kid going to their daddy with their report card. About the fifth time, he's like, 'That's it. That's what I'm talking about.”'