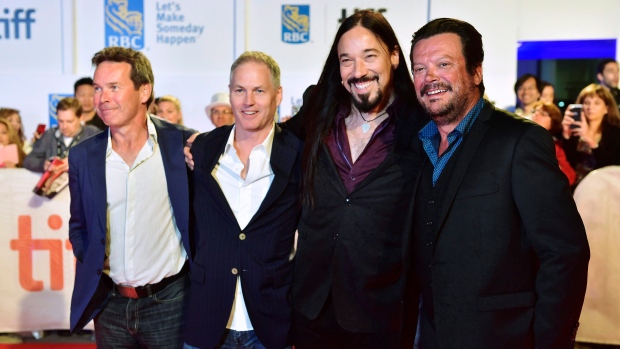 The Tragically Hip, from left, Gord Sinclair, Johnny Fay, Rob Baker and Paul Langlois arrive on the red carpet for the movie "Long Time Running" during the 2017 Toronto International Film Festival in Toronto on Wednesday, September 13, 2017. THE CANADIAN PRESS/Frank Gunn

TORONTO - The Tragically Hip is giving their fans something to sing about with a new album of long-lost recordings.

The Hip will release the collection Friday under the name “Saskadelphia,” a nod to the original working title of their chart-topping second album, which included “Little Bones” and “Long Time Running.”

“Saskadelphia” includes lead single “Ouch,” a gritty barroom fireball with the late Gord Downie growling lyrics against a wall of guitars, and “Crack,” among the band's most effervescent rock tracks.

The album is rounded out with a live version of “Montreal,” a song the band says was written shortly after the 1989 massacre at Ecole Polytechnique.

Recorded at what's now known as the Bell Centre on Dec. 7, 2000, the day after the 11th anniversary of the massacre, Downie introduces “Montreal” as a song about “the identification process.”

Guitarist Rob Baker says he believes Downie was referring to the identification of a dead body, as the lyrics recount a family preparing their daughter for her funeral.

“Saskadelphia” will be released on streaming services, vinyl and CD on Friday.

We are pleased to present Our Brand New Record, Saskadelphia. 6 previously unreleased songs.

Read the story of how at all came to be, order the Vinyl or CD, & check out where to stream at this link: https://t.co/waCyyto1Ed pic.twitter.com/JxG2X0rkeJ

This report by The Canadian Press was first published May 20, 2021.