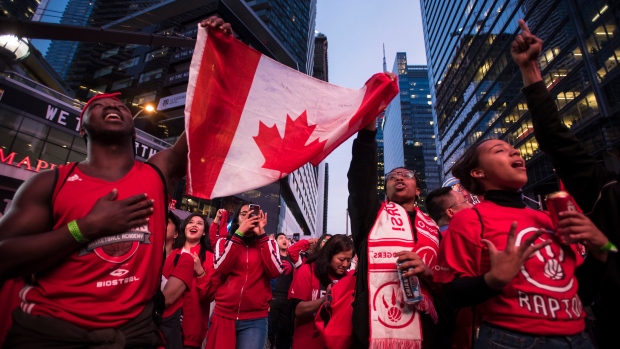 Toronto Raptors fans sing the Canadian national anthem outside the Scotiabank Arena, at what's dubbed "Jurassic Park," during the NBA finals debut against the Golden State Warriors in Toronto on Thursday, May 30, 2019. THE CANADIAN PRESS/Tijana Martin

The NBA changed things up for Game 5 by saying it would be up to "all fans" inside the venue, and across the country, to sing loud and proud.

They did just that, with the sellout crowd coming together for a powerful rendition of the Canadian anthem before the Toronto Raptors took on the Golden State Warriors.

A live shot from the outdoor Jurassic Park fan zone was shown on the arena big screen before Tranquada returned to the microphone for the anthem's final line. He then raised his arms in the air to thunderous applause before the crowd quickly transitioned to a vociferous "Let's Go Raptors" chant.

The American anthem was performed by Grammy-winning R&B singer Monica, best known for her chart-topping duet "The Boy is Mine" with Brandy.

The Raptors were hoping for a momentous night -- they were looking to secure their first championship title in history with a victory.

Fans reacted warmly on social media when plans for the "O Canada" rendition were announced earlier Monday, with some welcoming "thinking outside the box" and saying the moment was sure to elicit "goosebumps."

Celebrity performances of Canada's national anthem, however, have drawn mixed reviews during the NBA Finals.

Saskatchewan-born country singer Tenille Arts faced some backlash on social media after Game 3 as several people accused her of "butchering" the anthem by veering away from its familiar tune.

Walk Off the Earth divided audiences for Game 4 when the four members gathered around a triple-necked string instrument for an acoustic folk version of "O Canada."

Canadian pop singer Alessia Cara fared better in Game 2 when she paused her a capella performance mid-song to let Raptors fans take the spotlight and largely sing the rest. The Tenors delivered a well-received rendition of "O Canada" in Game 1.