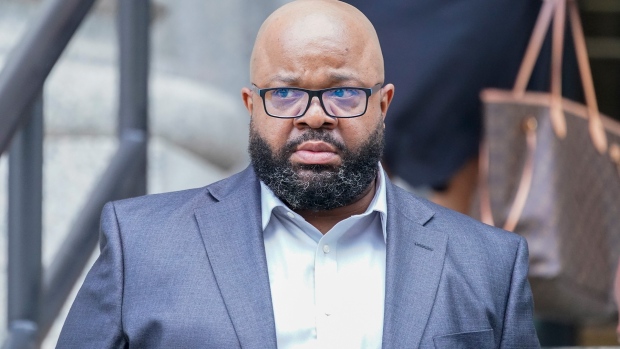 R. Kelly's manager Donnell Russell leaves federal court, Wednesday, July 20, 2022, in New York. Russell's trial opened Tuesday on charges that he forced the cancellation of a screening of a documentary about the singer's sexual abuse of women and girls by calling in a threat to the crowded Manhattan theater. (AP Photo/Mary Altaffer)

NEW YORK (AP) -- R. Kelly's manager was convicted Friday of making a phone threat that gunfire was about to occur at a crowded Manhattan theater preparing to show a documentary about the singer's sexual abuse of women and girls.

The jury convicted Donnell Russell of threatening physical harm through interstate communication, but it exonerated him on a conspiracy count.

She said phone records proved a call in December 2018 to the small theater came from Russell's Chicago home after he'd spent the day trying to stop Lifetime's “Surviving R. Kelly” series from being shown.

Pomerantz said Russell was motivated by a desire to keep income flowing from the lucrative career of Kelly, the Grammy-winning, multiplatinum-selling songwriter.

Kelly, who was sentenced to 30 years in prison last month, was convicted last year of racketeering and sex trafficking.

Defense attorney Michael Freeman had argued in his closing that there was not enough evidence to prove guilt.

He predicted prosecutors would continue to mention Kelly's name in their arguments.

In its closing argument, the government played a recording of the call to police made by Adrian Krasniqi, who worked at the 25th Street venue. Krasniqi said a deep-voiced man who sounded “like a thug” warned that “someone had a gun and they were going to shoot up the place.”

Krasniqi testified during the one-week trial that he received the threatening call less than an hour after a man claiming to be part of Kelly's legal team called and said the documentary was violating Kelly's copyright to his name and should not be shown.

The phone call prompted an emergency call to police, who ordered an evacuation that forced the cancellation of the premiere, including a live panel discussion that was to include several women featured in the documentary.