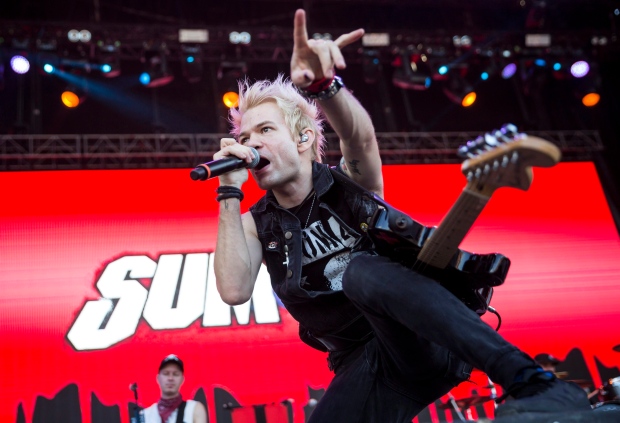 Singer, guitarist Deryck Whibley performs during the concert of the Canadian rock band Sum 41 at the 24th Sziget (Island) Festival on Shipyard Island, Northern Budapest, Hungary, Sunday, Aug. 14, 2016. The festival is one of the biggest cultural events of Europe offering art exhibitions, theatrical and circus performances and above all music concerts in eight days. (Janos Marjai/MTI via AP)

TORONTO -- Sum 41 lead singer Deryck Whibley knew exactly what happened only moments after he awoke tethered to wires in a hospital bed.

Seventeen years of hard drinking and wild nights of partying like a rock star finally took their toll on his liver and kidneys. He was sure they would eventually.

But it was this humbling moment, as he peered across the room at his worried mother -- who had flown across the continent, from small town Ajax, Ont., to Los Angeles' Cedars-Sinai hospital -- that the severity of his alcoholism truly hit him.

"I knew instantly when I saw my mom's face," the 36-year-old musician recalls. "She'd come all the way from Ajax and was there standing over me."

Whibley says that's when he decided to quit drinking.

Life had spiralled out of control long before the Sum 41 singer wound up in hospital.

After years as chaperones of the pop-punk movement, the band was on the brink of destruction. Major hits like "Fat Lip" and "In Too Deep" had given way to extensive touring and a steady flow of album releases.

Coming off their gruelling "Screaming Bloody Murder" tour, which dragged on for about three years, Whibley says he was ready to call it quits in early 2013. The band's drummer Steve Jocz had already thrown in the towel.

"We had burnt ourselves out so much," he says.

But instead of making a rash decision about the band's future, Whibley took a vacation in the bars of L.A. He partied and drank with friends and lived his life "with no rules or responsibilities whatsoever."

About a year later he was laid up in hospital under sedation for a week. Doctors said another drink and he'd probably die.

Clawing back from liver and kidney failure seemed like an impossible task.

With muscular atrophy in both his legs, the fallout from being bedridden for a month, Whibley was starting from scratch. His motor skills were off kilter, he had trouble speaking, and he couldn't play guitar.

"The nerve damage on the bottom of my feet was so bad that I couldn't stand or walk," he says.

"Even if nothing was touching my feet it felt like I was sticking them in a fire."

Determined to beat his condition, Whibley started a gruelling combination of physio and mental therapy.

Meanwhile, he knocked out lyrics for new songs while watching Quentin Tarantino and Tim Burton movies with the volume down for inspiration.

Sum 41's latest album "13 Voices" captures Whibley's struggle to reclaim his life. The songs are written in chronological order, starting with his early recovery days and tackling the personal hurdles he encountered along the way.

Opening track "A Murder of Crows" addresses some of the supposed friends who exploited or abandoned him in his most desperate hours, while lead single "War" is a pledge to soldier on through the hopelessness.

"I was at a tipping point," he remembers.

"It had been over a year and I wasn't getting any better. It just felt easier to go back to drinking, even though I knew that would probably kill me."

Once he scribbled down the lyrics to "War" and read them back to himself, he says he regained confidence.

"So what am I fighting for? / Everything back and more." It was a reminder to keep pushing ahead.

Instead of staying in a 12-step program, he found discussing alcohol only reminded him of the parts of life he was trying to leave behind.

"I just felt so much better when I did my own thing," he says.

"So I stopped listening to everybody and recovered in my own way, really. That is what kept me going."

Two years passed before Whibley felt any victory, he says, though he knows evading the bottle is a battle that will probably last a lifetime.

Sum 41 fans also gave him fuel with letters of encouragement that were deeper than the usual "Get Well" cards.

"They would send messages every day that were really heartfelt and emotional," he says.

"That became something to look forward to."

Whibley hopes to return the favour with "13 Voices," an accompanying tour, and enough tracks to probably fill another album.

"I had a whole bunch of other songs I didn't feel fit on this record," he says, noting they're in the vein of Sum 41's earlier hits.

"They're a little more pop-punk."

Whibley also wants to stand with fellow recovered alcoholics, showing that not everyone fits the stereotype of middle-agers who have a problem with the drink. He says many people in their early 30s or younger face similar battles.

"I'm never going to tell anybody what they should or shouldn't do," he says.

"All I can tell you is what happened to me."