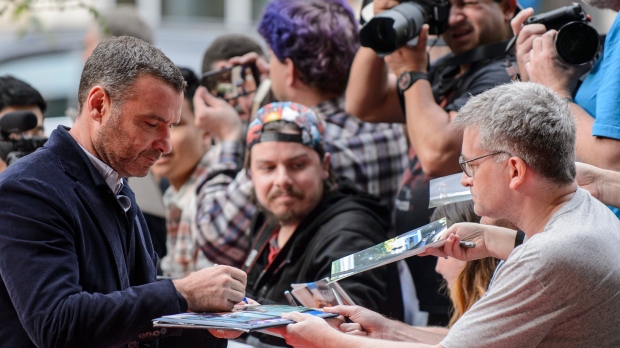 Liev Schreiber arrives for the gala of the film "Human Capital" at the 2019 Toronto International Film Festival in Toronto, on Tuesday, September 10, 2019. THE CANADIAN PRESS/Andrew Lahodynskyj

"We know we were tracking very well in terms of ticket sales and kind of outpacing 2017, which had been the highest year for TIFF," Joana Vicente, TIFF co-head and executive director, said Thursday in a phone interview.

"So we're optimistic about the final results."

This, despite some restrictions on the number of theatres the festival was able to use to screen films intended for streaming services this year.

Vicente said theatre giant Cineplex, which "has been a great supporter of the festival and partner," didn't allow TIFF to screen films that won't have a traditional cinema release, like the buzzy Netflix title "Marriage Story."

Instead, the festival had to program its streaming-service-bound titles at its TIFF Bell Lightbox.

"There were hundreds of fantastic films screening as part of this year's festival and with all those options we asked that our screens feature titles from studios who understand and appreciate the importance of the theatrical release model," Cineplex spokeswoman Sarah Van Lange said in a statement.

Vicente said it was not an "ideal situation," but TIFF was able to make it work.

"I think we were able to do it in time so that we weren't having to reschedule screenings. That was also important to us," added TIFF co-head and artistic director Cameron Bailey.

"We expect that exhibitors in North America, probably around the world as well, will come to some kind of agreement with streaming services that aren't using traditional theatrical windows to release their films.

"There will almost certainly be more films that are presented to us and that we might invite into the festival from those new companies. So things are continuing to evolve."

TIFF feels the situation is "really between the platforms and the exhibitors," Vicente said.

"It's not our issue," added Bailey. "We're here to present films, to launch them ... and of course we do it in movie theatres on the big screen with big audiences -- and we're committed to that. The films will then go on to play wherever they play, but our concern is presenting them in the best possible situation as a festival."

This is the first year the festival has had a co-head structure of Vicente and Bailey, after last year's departure of longtime director and CEO Piers Handling.

The two said they feel the 44th instalment, which began Sept. 5 and runs through Sunday, has "gone really well," citing strong reception from audiences, film critics and industry.

She said the gala also reached its fundraising goal and raised awareness for TIFF's year-round activities, while helping to keep major celebrities at the festival for a bit longer than the usual star-stacked first weekend.

Bailey and Vicente are also optimistic that TIFF's push for more diversity behind the scenes and off-screen, as well as its Media Inclusion Initiative to add new faces to its press corps, are having an effect.

"It just felt like the change was beginning to really take root," said Bailey, citing anecdotes from members of the media about seeing a more diverse audience in press and industry screenings.

While some film critics are saying there isn't a clear front-runner emerging from the slate of films, and it's unclear which title will win the People's Choice award on Sunday, Bailey notes that isn't necessarily a bad thing.

"If there's no one that's outpacing all the others, that's probably a good thing, because it shows that the general field has been strong."