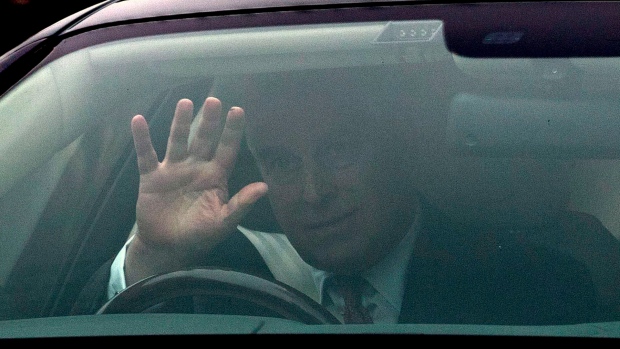 Britain's Prince Andrew leaves his home in Windsor, England, Thursday, Nov. 21, 2019. A lawyer for the victims of sex offender Jeffrey Epstein says Britain’s Prince Andrew should speak to U.S. investigators immediately about what he knew of the convicted pedophile. U.S. attorney Gloria Allred says Andrew should contact American authorities “without conditions and without delay." Andrew has announced he was pulling out of public duties “for the foreseeable future” amid a firestorm of criticism over his friendship with Epstein. (Steve Parsons/PA via AP)

London police are defending the decision not to pursue a full investigation of allegations made against Prince Andrew by a woman who says she was trafficked by the late convicted sex offender Jeffrey Epstein.

Police acknowledged Thursday that they received a complaint in 2015 from a woman alleging she was the victim of trafficking for sexual exploitation.

The woman, Virginia Roberts Giuffre, has said she was trafficked by Epstein and had sex three times with Prince Andrew starting in 2001, including once in London. She says she was 17 when they first had sex.

Metropolitan Police Commander Alex Murray said police concluded in 2016 after looking into the matter and consulting prosecutors that the London-based force was the wrong agency to investigate.

“Following the legal advice, it was clear that any investigation into human trafficking would be largely focused on activities and relationships outside the U.K.” he said.

The London police, he added, would not be the “appropriate authority” to investigate.

Epstein, a wealthy financier, died in prison in August in what the New York City coroner ruled as a suicide. He faced trafficking charges.

The Met's Murray said police reviewed its decision after Epstein's death and decided not to change policy.

Andrew, 59, has repeatedly denied the allegations, most recently during a televised interview broadcast nearly two weeks ago in which he lost public support by defending his friendship with Epstein and by not expressing sympathy for Epstein's many young female victims. The prince has since stepped down from royal duties because of the scandal.

A television interview with Giuffre is scheduled to be broadcast Monday in Britain. She has said Andrew must take responsibility for what he's done.

Murray also said that London police have not received a formal request for assistance from other law enforcement agencies investigating the case.

U.S. officials are still looking into the case and a number of civil lawsuits against Epstein's estate are in progress.