What's old is new: Why a Weeknd song from 2016 is now a chart smash 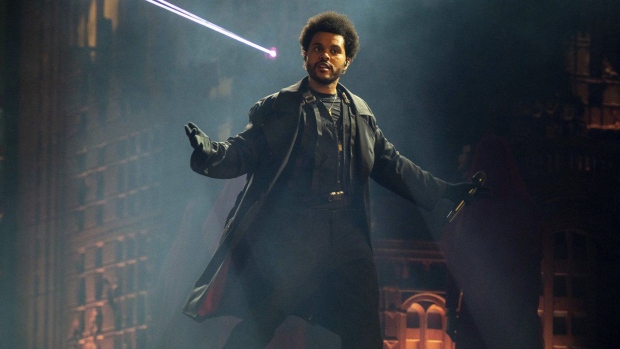 The Weeknd performs during The After Hours Til Dawn Global Stadium Tour at Mercedes Benz Stadium on Aug. 11, 2022, in Atlanta. The Weeknd's latest radio hit "Die For You," which sits at No. 6 on the Billboard Hot 100 this week, comes from an album the Toronto pop singer released six years ago. THE CANADIAN PRESS/AP-Photo by Paul R. Giunta/Invision/AP

TORONTO - If the Weeknd's fresh hit “Die For You” seems mighty familiar, it's probably because it first soared up the radio charts five years ago.

The Toronto pop superstar's moody and melodic track is scaling the upper ranks of the Billboard Hot 100 - a chart where new singles reign supreme. This week, it rises to No. 6 from No. 8.

But it's hardly a new song, having appeared three studio albums ago on the Weeknd's smash 2016 record “Starboy.” In that era, it was released as a radio single and became a Canadian hit long before its more recent comeback.

“Die For You” is part of an increasingly frequent phenomenon in which an older song climbs the music charts after a gale force of social media attention makes it impossible to ignore.

It almost always involves TikTok, which doesn't factor into a song's Billboard chart position, and that momentum ricochets through other places that do affect the charts, such as streaming outlets and radio stations.

Most famously, Kate Bush's 1985 single “Running Up That Hill” got a surprise boost last summer when it appeared in Netflix's “Stranger Things,” leading online creators to use it for TikTok videos, music lovers to stream the track and radio DJs to add it to their rotation. The song peaked at No. 3 on the Hot 100.

Sia saw a similar boost last fall after her 2016 track “Unstoppable” was played in a television commercial and subsequently landed in more TikToks. Radio stations then put it into heavier rotation, pushing it to a peak of No. 28 on the main Billboard chart.

“It can happen overnight,” he said. “Somebody grabs the song, they put it in the right place at the right time, and then it just clicks.”

Before TikTok, Hollywood movies were often the vehicle that returned classic tracks to the charts.

It happened after the Righteous Brothers' 1955 ballad “Unchained Melody” appeared in the pottery-making love scene of 1990's “Ghost.” Its resurgence peaked at No. 19 on the Billboard Hot 100.

And when Mike Myers and Dana Carvey headbanged to Queen's 1975 single “Bohemian Rhapsody” nearly 20 years later in the comedy “Wayne's World,” the rock classic took off anew on a boom of radio play and record sales that pushed it to a high of No. 2.

The difference now is that social media has made those bursts of cultural relevance more sudden and unpredictable, especially as the influence of traditional record labels wanes and listener tastes take the lead, suggested manager Sarah Fenton.

She saw that first-hand when Mother Mother, the Vancouver rock band she helps manage, felt the TikTok bump in late 2020.

Seemingly out of nowhere, their 2008 song “Hayloft” became a favourite on the app, and in the months that followed they scrambled to capitalize by making a new music video and followup song titled “Hayloft II.”

Now another older Mother Mother song called “Verbatim” is gaining attention online, she said, but this time the band is doing what it can to ride the song's resurgence as it happens. Their team is making lyric videos in multiple languages, inspired by data pulled from the countries where the song has the most listeners.

Even if “Verbatim” doesn't soar up the Hot 100 charts as a Weeknd track would, there's much potential in the attention, said Fenton, part of the team at Watchdog Management.

“There's a whole new global audience that we have access to ... each time we have a new trend on TikTok or other socials,” she said.

“If you're smart, you just throw some gas on the fire and see what happens.”

Promoting older songs might seem counterintuitive because “artists want to focus on what's new and what's next,” Fenton added. But done properly, she said the renewed popularity can bridge the gap of silence between a musician's last album and their next project in a saturated market.

That's effectively what happened in late 2021 when the Weeknd's team marked the five-year anniversary of his defining album “Starboy.”

Fans had already embraced “Die For You” as a lost favourite and so when the singer filmed a belated music video, the song was given a jolt of energy that extended through his North American concert tour. He included the song in his show's setlist, which was packed with his biggest singles.

When the Weeknd's early 2022 album “Dawn FM” proved to be short on massive hits, a combination of TikTok velocity and radio support pushed “Die For You” up the charts.

Blair worries so many older tracks landing on the charts suggests a music industry failing to connect with its audience, which can leave even musicians themselves reacting to trends and not necessarily inspiring them.

Since it's never been easier to access music online, both listeners and the industry are wading through a bottomless pit of content to draw on anything that resonates, he said.

“Songs that are good enough to be classics always rise to the top, and right now there's a drought of new songs music listeners feel represent their experiences,” he said.

“And so everything old is new again. I don't see that changing any time soon.”