Fatal shooting in Parkdale being investigated by SIU

A fatal shooting in Parkdale is under investigation by the province's Special Investigations Unit after a police officer was also stabbed.

Two Toronto police officers went to 200 Dufferin St., south of King Street at about 8 p.m. on Saturday for an investigation.

In an altercation between the officers and a 28-year-old man at the residence, one officer was cut to the face, while the man was shot at least once. The man died from his injuries at the scene.

Both officers were taken to hospital for treatment. The officer that was stabbed, suffered what are not believed to be life-threatening injures.

The victim's body was removed early Sunday morning and transferred to the coroner's office. 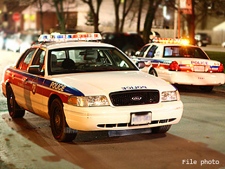