THORNHILL - Hundreds of colleagues and members of the public lined up outside a funeral home Monday to show their respects to an officer who died after being dragged and pinned under an overturned minivan he had stopped.

Some waited more than hour to attend the visitation for York Regional Police Const. Garrett Styles, 32, a married father of two whose funeral Tuesday is expected to draw thousands.

"I feel very sad and very disappointed that something like this could even happen," said Gordon Kane, a retired paramedic. "It's beyond me why these things happen."

Police have charged the alleged driver of the vehicle -- a 15-year-old boy -- with first-degree murder.

The seven-year officer, who would have turned 33 last weekend, leaves his wife Melissa and two children, 2 1/2-year-old Meredith and nine-week-old Nolan.

"I feel so bad for her . . . (she) lost her husband so young," said Marianne Fairclough. "His two little children: I hope God will look after them."

Colleagues described Styles, who pleaded for help from his dispatch as he lay pinned under the minivan, as a dedicated officer and the kind of great guy you would want as a neighbour.

Shirley Smith, a civilian colleague of Styles', scrapped her planned holiday to attend the visitation.

"I didn't want to be away," Smith said. "So I cancelled going up to Ottawa to visit family to be here to pay tribute to him and his family."

Between 5,000 and 7,000 police officers from across North America were expected to attend a procession and memorial service on Tuesday in Newmarket, Ont., where Styles was based. His wife is scheduled to give a eulogy at the ceremony.

"We've just had such a tremendous outpouring from the public of sympathy," Rogers said. "The family has been truly encouraged by that."

A large public turnout would also encourage other officers to keep on going out to do their potentially lethal jobs every day, she said.

Rogers said she didn't know if she would be able to make that kind of call with a minivan crushing her, but said it reflected Styles' stellar qualities.

"You could hear that he was obviously quite concerned for the young kids that were inside that van," Rogers said. "That was him: He was the outstanding policeman that went a little bit further every time."

Joe Solski, who lost a child to cancer, turned out at the visitation to pay his respects, saying he could not imagine how hard it must be for the Styles' family to cope with the loss.

The charged teen, who was badly hurt in the incident, was slated to make his first court appearance Thursday.

If convicted, the boy could face a maximum sentence of life behind bars with no possibility of parole for 10 years. 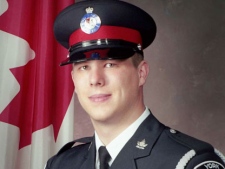