Banksy exhibit attracts fans from all walks of life 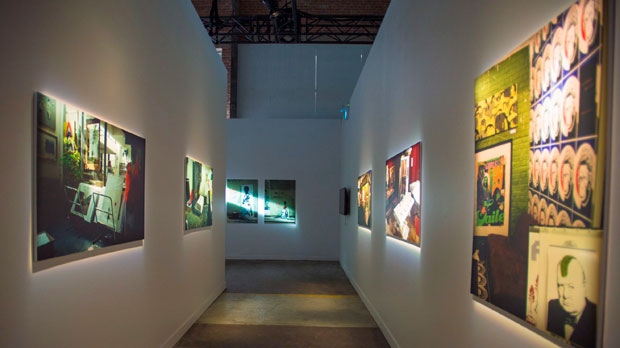 A preview of the Art of Banksy exhibit at 213 Sterling Road in Toronto is pictured on Monday, June 11, 2018. THE CANADIAN PRESS/ Tijana Martin.

TORONTO -- The largest collection of art by the mysterious street artist Banksy gets a splashy North American premiere this week with an unauthorized look at his rise from underground subversive to hip media darling.

Curator and former manager Steve Lazarides says he expects "The Art of Banksy" to attract Banksy fans from all walks of life, even the societal elite that the urban artist is wont to target with his politically charged stencils.

"It's weird, the establishment seem to love it," Lazarides says of the artist's unabashed mission to provoke with colourful, often humorous, images.

"He's always had that kind of broad church of supporters anyway, from the very beginning. It was a very wide spread of people, it wasn't just graphic designers in backpacks that were liking his work in the beginning."

There will be a wide array of pieces to take in, he adds, pointing to sculpture, screen prints, canvases and multimedia pieces that have been installed in a sprawling former factory space west of the downtown core.

All were created for display or sale, he adds, expressing a "pathological hatred" for collectors who remove Banksy's street pieces for private buyers.

Nevertheless, he admits that Banksy hasn't endorsed the exhibit, but he believes that's allowed for an objective overview of his former pal's oeuvre.

"To be honest this isn't a Banksy exhibition, it is an exhibition of Banksy's art and I think there's a big difference between the two," says Lazarides, who says he hasn't spoken to the artist in a decade.

Several works come from Banksy's "Barely Legal" show in Los Angeles in 2006, and a retrospective held in Bristol, England in 2008.

Other pieces are on loan from private collectors, including three from a former Toronto resident who now lives in Hong Kong, says Michel Boersma, Live Nation's senior vice president of family entertainment & theatre.

That collector shared two versions of Banksy's famed "Balloon Girl," in which a young girl is seen letting go of a red heart-shaped balloon, he says.

Boersma is looking forward to showing the 7.5-metre tall "Forgive Us Our Trespassing," which he says hasn't been seen in a decade. Another highlight is a stencil on a garage door shutter, which he says is the only piece of street art Banksy has acknowledged because it was done on a friend's garage as a gift.

"For me, it was a more interesting start than just go straight to a 'New York.' And I think it's the right decision that we all took because the location is great ... we have this beautiful old industrial venue where we're now building a museum in," says Boersma, whose company teamed with Starvox Exhibits for the tour.

In addition to being the largest collection so far, he says the Toronto show adds videos and an audio guide, in which Lazarides shares stories about specific pieces.

The duo met in 1997 when Lazarides was hired to take Banksy's photograph. Both from Bristol and sharing mutual friends, they became fast friends with Lazarides soon accompanying Banksy to document his graffiti escapades. Eventually, he would help Banksy sell prints from the trunk of his car, and then launch a gallery show to fund more illicit exploits.

One such outing produced a large image of a Queen's guard on a West London wall, which Lazarides recalls Banksy painting in broad daylight.

"There's a whole crew of people (involved) so sometimes we'd close off a road, we'd park something in the way, there's all sorts of different techniques employed over the years," Lazarides says of how Banksy pulled off the stunt.

"He always was bold as brass when he put his pieces up and got caught very, very few times. I think people (would) walk past and think it was somebody else's problem. If it's happening in the middle of the day I think people think it's allowed to happen."

And although many of the images have been shared on social media, Lazarides insists that seeing them in person is different: "There's a reason people queue up at the Louvre to see a picture of the Mona Lisa even though they can get a postcard of it in their local shop. Pictures have power."

The work is fun, pointed and tailor-made for a general audience, he adds.

"They don't feel like they need an art degree to understand. This was art that was made for them, by one of them," says Lazarides.

"It's a fairly simplistic, political message that everybody can get, and I think it provokes conversation and now in the age of social media, things get spread around so quickly that that's what's made him a global star."

As for Banksy's identity, Lazarides doesn't expect him to ever reveal it. Even if he went public, he doubts anyone would believe him.

"I said to him years ago that he should out himself because no one would believe it," he says. "I think people are expecting, like, Brad Pitt on a white horse coming through and taking on ISIS single-handedly (but) Banksy's just a regular Joe."

"The Art of Banksy" runs Wednesday to July 11.