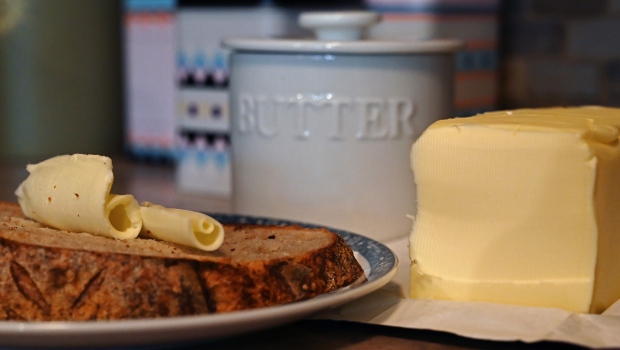 Butter and sourdough bread is shown at a house in Vernon, B.C. on Wednesday, February 24, 2021. THE CANADIAN PRESS/Jesse Johnston

A dairy producers' lobbying group is asking farmers to consider alternatives to palm supplements in livestock feed pending the results of an investigation launched in response to consumers' concerns about perceived changes to the consistency of butter.

The Dairy Farmers of Canada says academics and industry experts will soon convene to examine the use of palm oil and its derivatives to boost cows' diets, while maintaining that the common practice doesn't raise health or safety concerns.

The inquiry comes in response to anecdotal reports that butter has gotten harder, but some experts question whether spreadability is a widespread issue.

Quebec Dairy Producers released a statement yesterday calling on farmers to stop supplementing cattle feed with palm-based products as part of a broader look into the use of these ingredients in human food.

The association says while the use of dairy feed supplements is in line with federal standards, there are concerns about the environmental impacts of palm oil production.

The Quebec Dairy Producers said it will follow the recommendations of the Dairy Farmer of Canada's working group, which will set out to assess the issue based on scientific literature and feedback from consumers.

“It is essential that decisions be made on a factual basis and that science guide our sector, hence the creation of a working group of experts,” Dairy Farmers of Canada said in a statement Thursday.

“Notwithstanding this announcement, we stress that all milk produced in Canada is as safe as always to consume and is subject to Canada's robust health and safety standards.”

At the centre of the churning controversy is Calgary food writer Julie Van Rosendaal, whose investigation into questions raised on social media about the consistency of butter has garnered international media attention, dubbed 'buttergate.'

Van Rosendaal posits that butter has become firmer as farmers have increased use of palm supplements in livestock feed to keep up with pandemic-fuelled demand for baking ingredients.

Alejandro Marangoni, a food science professor at University of Guelph, says while components of palm oil found in milk fat can affect the melting point of butter, there's no data to support “sensationalist” claims of a great hardening.

Christensen says if the consistency of butter has changed, it could be related to the palmitic acid content, or changes to the methods processors use to produce butter.

This report by The Canadian Press was first published Feb. 25, 2021.