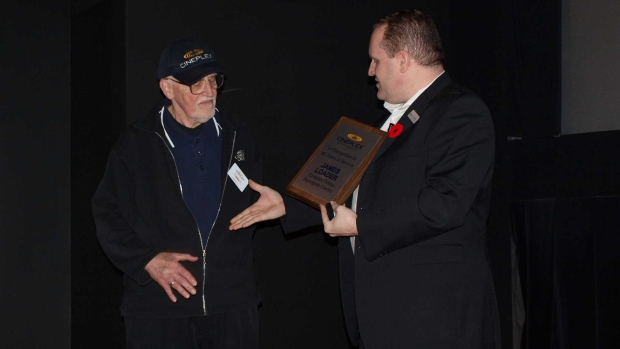 For 55 years James Loader greeted movie-goers, most recently at Morningside Cinemas. His watchful eye and friendly chatter were as much a part of the place as the screens. But last week, the longtime usher ripped his last ticket.

Loader, 83, worked his last shift at the theatre on New Year’s Day. He died peacefully in his sleep over the weekend and was discovered by his family on Jan. 3.

“We are devastated by the loss of James Loader, our loyal usher at Cineplex Odeon Morningside Cinemas who was part of the Cineplex family for nearly 55 years,” Cineplex spokesperson Sarah Van Lange said in an email. “James was not only a legend with our team, he was also a legend with the Scarborough community as a whole.

“He has a lasting legacy and will be greatly missed. Our thoughts go out to James’ family and loved ones as we mourn his loss.”

Tributes flooded a 1300-member Facebook page dedicated to Loader Monday as news of his passing spread.

Colleagues and patrons alike heaped praise on the affable usher, remembering him for his strong work ethic, his quick humour and his friendly manner.

“So sad to read this news...all my years in Scarborough Mr. Loader has been an integral part of my childhood and adulthood,” theatre-goer Steve Slavi Kasan wrote.

Co-worker Jason Chavez recalled that “James wouldn’t miss a day of work” commuting through snowstorms to still arrive early for his shifts.

Loader’s daughter Patricia Lalonde told CP24.com her father was known in the community at large as an ever-present staple who held a place in the hearts of those he met.

Lalonde couldn’t say exactly how many tickets her father had ripped over the years, but estimated that it would be ‘many, many thousands.’

Shy by nature, Loader was a movie-fan who liked action movies and loved his job at the theatre because it gave him a chance to interact with the patrons, she said.

“He always told me it kept him young and that’s why he continued to work,” Lalonde said. “He loved the young people. He just loved chatting with people as he took the tickets.”

No funeral arrangements have been made so far, but Lalonde said the plans will be made public when finalized so that the community can pay their respects.