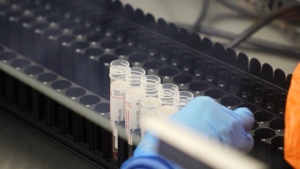 TORONTO - The shortcomings of Canada's COVID-19 testing strategy came to the fore Wednesday as Ontario's premier admitted to “unacceptable” testing rates, Quebec promised to aggressively root out infections in long-term care homes and Nova Scotia expanded its eligibility criteria, vowing to test anyone with so much as a runny nose and sore throat.

Provincial leaders declared they will expand their testing rules as cases and deaths continued to rise and questions persisted about the true extent of community spread.

Meanwhile, critics pointed to a mish-mash of surveillance strategies that can vary widely even within provinces and communities, making it hard to build a true picture of just how pervasive COVID-19 really is.

Dr. Camille Lemieux, chief of family medicine at the University Health Network, expressed frustration Wednesday over revelations Ontario has been sending roughly 3,500 tests a day to its labs of late, even though they can accommodate 13,000.

Although community assessment centres are told to use their clinical judgment to administer COVID-19 tests, she says staff are also told to adhere to provincial criteria that is being applied inconsistently from centre to centre.

“Ontario in my opinion is making decisions in the dark and making decisions based upon what they don't know,” says Lemieux, who works out of Toronto Western Hospital where she's also the medical lead for the facility's assessment centre.

Ontario has been singled out for having the lowest rate per capita of testing, while Alberta is among the leaders.

Ford blamed tight restrictions - which largely limited tests to at-risk groups with symptoms - on the need to conserve test swabs and lab chemicals amid global shortages, as well as delays in opening testing centres and more laboratories.

Meanwhile, Quebec Premier Francois Legault said all residents and staff in the province's long-term care facilities will be tested for COVID-19, and that more doctors and nurses would be deployed there.

Almost half of Quebec and Ontario deaths tied to the virus have come from long-term care homes.

Nova Scotia followed with news it has expanded the list of symptoms being screened to include sore throat and runny nose as well as fever, new or worsening cough or headache.

“We are probably going to have a lots of people that come forward with a runny nose and a headache and we are going to be testing them,” said Dr. Robert Strang, the chief medical officer of health.

At the same time, Health Canada urged average Canadians to volunteer as a “FluWatcher” by signing up for a questionnaire that would be emailed weekly asking whether participants have had a cough or fever in the previous week.

“If outbreaks do happen, this tool can give us an early warning,” says the online surveillance system, which normally tracks the flu but is now shifting focus “to tracking COVID-19 over the spring and summer months.”

The possibility that COVID-19 is lurking silently in communities worries Joanna Dunham, who suspects her Niagara Region family of four came down with the disease after returning from a trip to Florida on March 7.

She says her 11-year-old daughter came down with a sore throat and runny nose on the 12th, prompting her to keep her home from school. But when Dunham reported the symptoms and travel history to Ontario's Telehealth service, she says they said the girl was at low risk for COVID-19 and could return to school the next day.

“Looking back on that in this whole situation, I wouldn't have sent her the next day. But all I could do was listen to the doctors and the nurses that I was on the phone with,” Dunham says from her home in the community of Smithville, Ont.

Thankfully, her daughter's symptoms remained mild, but four days later, Dunham says her seven-year-old son developed breathing problems and a fever of 103.7 F. He was tested for COVID-19 the next day and confirmed as positive 13 days later.

In the meantime, Dunham says the entire family self-isolated but worried they may have spread the virus before symptoms emerged. She'd like to see the province broaden testing beyond essential workers and at-risk groups.

“In order to stop the spread they need to widen that range,” Dunham says.

Lemieux says likely COVID-19 cases are frequently refused tests at her Toronto assessment centre: “I can't describe to you the level of frustration that puts on those of us who are working and really want to be testing more broadly.”

“It's not a matter of who looks better. It's a matter of how collectively we're doing on a Canadian basis, and are we together, (flattening) the curve for Canada?” said Williams.

Tara Moriarty, an associate professor in the University of Toronto's faculty of medicine who started a petition calling for increased testing capacity, said broader testing is crucial to suppressing COVID-19's spread and its impact on the health-care system.

“The ramifications of this delay in testing scale-up is enormously problematic for the most at-risk populations, seniors in assisted living and (long-term care) homes. Testing should have been massively scaled up there last week,” Moriarty said.

“This is a big problem.”