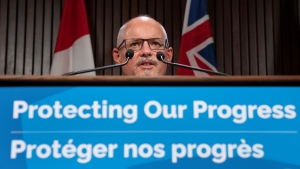 Dr. Kieran Moore, Ontario's Chief Medical Officer of Health makes an announcement on preparations underway for the return to in-person learning during the COVID-19 pandemic in Toronto on Wednesday, January 12, 2022. THE CANADIAN PRESS/Nathan Denette

Ontario will no longer mandate mask use, self-isolation for COVID-exposed people or symptom screening requirements in most situations as of March 21, with a wider effort to end all emergency pandemic requirements by the end of April.

Ontario will end the requirement to wear masks in most indoor public settings and schools on March 21.

On that date, mask use in all indoor public settings, including schools, will end.

Users of public transit and all patients, residents, visitors and staff in hospitals, congregate care settings, jails and the long-term care system will continue to be required to don masks until at least April 27.

“Removing the mask mandate does not mean the risk is gone,” Ontario Chief Medical Officer Dr. Kieran Moore said Wednesday. “Covid-19 is still transmitting and masks can protect you and others around you becoming infected.”

Also gone on March 21 will be the daily symptom screening requirement parents must complete before dropping their children off at school.

Other school requirements such as cohorting will end but Ministry of Health officials said supplies of personal protective equipment and rapid antigen tests will continue to flow to schools.

Officials stressed that the official government stance would remain to recommend mask use wherever possible after March 21, but it would no longer be mandatory.

“I know a lot of people don't want to keep them on and again, we aren’t leading the way in this, we are kind of middle of the back. It's going to be up to the people of Ontario, if you want to keep the mask on, keep it on,” Premier Doug Ford said in Brantford when asked by a reporter about the changes. “If you want to take it off, take it off. But we have to move forward from this, people are exhausted and the poor kids in those classrooms too. Like we got to move on.”

Moore said Ontario’s plan “aligns” with that of other Canadian provinces.

“Our plan to remove masking aligns and is even more cautious than most provinces if you look at other jurisdictions,” he said.

Alberta dropped its mask mandate on March 1 and Quebec ended masking in school classrooms on March 7.

When asked what he will do personally, Moore said he would continue wearing a mask at a mall such as the Eaton Centre or when going to a big box store.

“So in outdoor settings, absolutely, I won't be wearing my mask, and I will do a risk assessment for high risk indoor settings. So if I go to the Eaton Centre, I'll wear my mask,” he said. “If I'm on the subway it will be mandated and also for the public bus or a streetcar. So I will continue to wear my mask in those environments. If I go to a busy big box store, I'll put my mask given it’s a crowded setting.”

“It is a choice now - you can do your individual risk assessment,” he said.

“You have to recognize that you can’t mandate masking forever, it has to become a choice.”

He urged members of the public not to bother or harass people who continue to wear masks in public settings.

“We have to acknowledge that some people will be quite concerned about the removal of a mask mandate,” he said.

Under its original plan published prior to the discovery of the Omicron coronavirus variant, Ontario was not planning to end the mask mandate until March 28.

The rules around self-isolation in the event of exposure are also changing, effective immediately.

Going forward, anyone exposed to COVID-19 outside of their household, regardless of vaccination status, will not need to self isolate.

Instead, they must refrain from public activities “where mask removal would be necessary” for 10 days, not visit anyone at high risk of a serious outcome or attend a place such as a hospital for 10 days, and self-monitor for symptoms.

Any unvaccinated person exposed to COVID-19 at home must still self-isolate while the infected household member is self-isolating.

The province’s Reopening Ontario Act and all related emergency measures, including those mandating mask use across the hospital sector, are set to expire on April 27.

The province is still detecting dozens of COVID-19 deaths per week, though the fatality rate has subsided from a peak in late January.

Access limits put on PCR tests more than two months ago mean Moore believes the province does not document as many as 90 per of new infections each day.

On Wednesday, health officials confirmed recipients and workers in the home care sector will now be eligible for free PCR testing for the first time since Dec. 2021.

They also stated that after March 11, the province will remove deaths from its COVID-19 tally where a clear alternate cause of death has been determined.

“I think based on where we are at in Ontario, it would still make sense to wear masks in indoor settings,” he told CP24.

The limited data on overall spread still available in Ontario suggests the decline has stopped recently, he said.

“Instead of seeing this plummet in cases, we’re actually seeing a plateau in cases and hospitalizations here in Ontario. This is the kind of thing where you want to see a sustained downward trajectory before you start to lift this final, light-touch intervention.”

Bogoch’s colleague, Dr. Abdu Sharkawy, was even more emphatic, saying the province will “regret” this decision.

“The message being sent out with these sorts of measures being changed is that this pandemic is over, and I think that’s very dangerous and it’s premature,” Sharkawy told CP24. “I have no idea where the confidence is coming from because all five previous waves have ended and been followed by another wave.”

“I think we’re going to regret this in the coming weeks.”

Ford said he did not express any view or pressure Ontario Chief Medical Officer Dr. Kieran Moore on when to lift the mask mandate or any of the other measures ending this month.

“Let me be very clear. There's no pressure on Dr. Moore. I follow the advice and the recommendations of the Chief Medical Officer of Ontario. He consults with the Science Table. We are going to take his advice on the timeframe moving forward and the masks.”

“While I accept the Chief Medical Officer of Health’s advice that Ontario should end mandatory mask restrictions outside of higher-risk, essential public services and areas later this month, I am drawing a line in the sand on our schools,” he said.

“I simply do not accept the argument that our kids’ schools are not higher-risk areas and essential, and the experts agree. We must wait a couple more weeks to make sure our kids will be safe.”

The Children’s Health Coalition, made up of children’s hospital leaders and physicians, echoed that sentiment.

“Since we know that most cases of COVID-19 identified in schools originate outside of school, we would have preferred to see masks kept in place for two weeks after March Break so we could have assessed the impact of the broader re-opening of Ontario,” it said in a statement issued Wednesday.

Speaking to CP24 on Wednesday morning, Toronto Mayor John Tory said it was not likely the city would extend its mask bylaw beyond any date announced by the province.

“With respect to likelihood of the city taking a different path when it comes to masks, I don’t think that it’s likely.”

He said the city’s current mask bylaw expires in April, but a new measure before city council today would allow them to easily end the requirement on March 21.

The scientific director of Ontario's Science Advisory Table said Wednesday that the province doesn't have the necessary data to support removing mask mandates.

"We would look to see... what the data are showing," Dr. Peter Juni told CP24. "I would like to make data-drive decisions."

He noted that the Science Advisory Table was not consulted in the province's decision.

"We weren't involved in this decision, which is fine. That's just how it happened," Juni said.

He added that right now it is unclear how the easing of other restrictions will impact key indicators in the province.

He said that while he believes the province should move slowly when it comes to the easing of restrictions, early indicators show Ontario is "looking actually quite well."

"What is important for people to understand is even if we go up we will not be in the same shoes that we were in the middle of December because we have so much immunity that has accumulated," he said.

Juni said if the province begins to see "strong, explosive growth" in COVID-19 transmission, it will need to rethink its approach.

Dr. Kieran Moore, Ontario's Chief Medical Officer of Health makes an announcement on preparations underway for the return to in-person learning during the COVID-19 pandemic in Toronto on Wednesday, January 12, 2022. THE CANADIAN PRESS/Nathan Denette