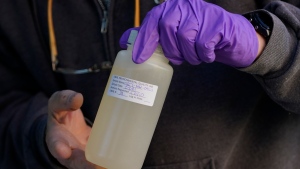 A man collects sewage samples from the dorms at Utah State University Wednesday, Sept. 2, 2020, in Logan, Utah. Experts say daily COVID-19 case counts aren't painting a true picture of viral activity in communities as testing decreases in parts of the country. But what we flush down the toilet might give us a better understanding of COVID-19's prevalence. THE CANADIAN PRESS/AP/Rick Bowmer

With a lack of PCR testing available in Ontario, public health officials have pivoted to using other data sources to determine how the province is managing the spread of COVID-19. Part of that process is an analysis of infection in wastewater—information typically presented to the public in the form of a graph showing an upward or downward curve.

But what is this wastewater data and what exactly is it telling us about COVID-19?

HOW DOES IT WORK?

Scientists gather these samples multiple times a week from various water treatment plants across the province, as well as select congregate settings, including long-term care homes, hospitals and correctional facilities. According to the provincial government, Ontario has the most comprehensive surveillance network in the country, with more than 170 testing locations in all 34 public health units.

University of Toronto Professor Elizabeth Edwards, co-lead of the surveillance team in Toronto and Halton Region, told CTV News Toronto that her team collects samples on Mondays, Wednesdays and Fridays.

The wastewater is then placed in a centrifuge so that researchers can extract RNA, a molecule similar to DNA, from the solid portions of the samples.

A PCR test helps determine how many copies of the virus is within that RNA.

“We get a concentration,” Edwards explained. “Just like copies of viral RNA pieces per millilitre of wastewater. And that's what we measure.”

The data provides a snapshot of community spread within a population—how much of the virus is found in a particular region or area.

The wastewater signal is quite stable, Edwards said, but it depends on elements such as quantity of rainwater in the sample, who is using the toilet in each area, and what else is being mixed in the system. Another challenge is that there may be solid materials within the sample other than human feces, which is where the virus is found. This can include dirt, other organic compounds and animal excrement.

However, with regular and duplicate sampling, experts say they are able to calculate the concentration of the virus within wastewater with strong accuracy.

WHAT DOES IT TELL US?

According to the wastewater data provided by the Ontario COVID-19 Science Advisory Table, the province is currently experiencing a rise in COVID-19 infection. On their dashboard, a graph titled “province-wide COVID-19 Wastewater Signal” shows a significant upwards trajectory, with the standardized concentration of the virus returning to levels last seen around the Christmas holidays. 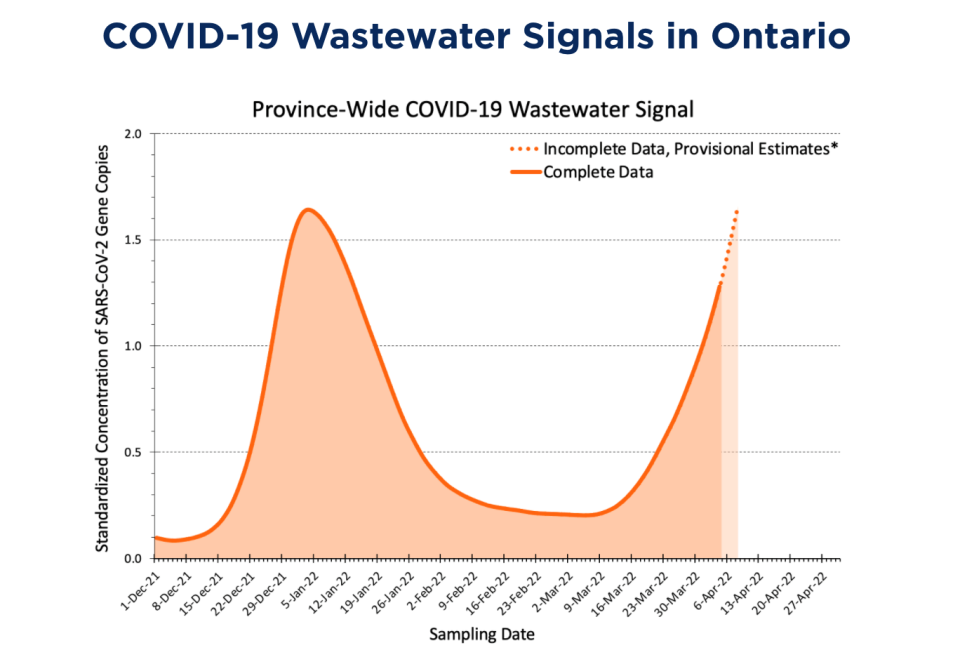 A regional breakdown shows that same spike in all public health units – indicating the spread of COVID-19 during the sixth wave is not limited by geography.

“What we're seeing in all jurisdictions across Ontario is the wastewater signal is going way up,” Dr. Lawrence Goodridge, a professor of food microbiology at the University of Guelph and another team leader for Ontario’s wastewater surveillance initiative, told CTV News Toronto.

“(This) means that the amount of virus, the concentration of virus in the wastewater is increasing…that there's lots of people that are infected.”

However, Goodridge notes that while wastewater data is accurate at determining virus concentration on a population level, it can’t tell us how many people are actually sick with COVID-19.

Researchers can also identify what variants of COVID-19 are dominant within a population, noting trends as one variant takes over from another. Goodridge said that, in January, his team saw primarily Delta viral infections, including multiple subvariants.

“Those subvariants originated in different regions of the world. So, we could tell, in some cases, where people had traveled to or where people were traveling to Canada from or even in Canada,” Goodridge said. “That that type of information is important, because … I like to say that in order to make decisions, you have to have the available information. So that information can be used to make public health decisions.”

“We know that wastewater is a great indicator of hospitalizations. So that information can be used by hospitals to prepare for the surge that's coming.”

In Toronto, for example, Edwards said that more than 90 per cent of the samples collected are now the Omicron subvariant BA.2. Last month Ontario officials said this “stealth” subvariant, which is more transmissible than other Omicron strains, would soon make up half of all infections.

It typically takes on average seven to 10 days for samples to undergo genomic testing and to be analyzed.

WHAT IS HAPPENING WITH THE SIXTH WAVE?

The speed at which the Omicron variant of COVID-19 spread across Ontario “took us all by surprise,” Edwards said.

At the same time, she said the sixth wave Ontario is currently experiencing is not the result of a fast-spreading variant. Rather, it is likely fuelled by policy.

“I think it's interesting, every little thing that is done in any jurisdiction has an impact on the signal,” she said.

The standardized concentration of COVID-19 in wastewater was decreasing in February and into early March before skyrocketing. Edwards points to a change in public messaging and the lifting of the mask mandate in Ontario as a potential reason for why there was a sudden uptick in the wastewater signal.

“I think that resulted in people relaxing,” she said. “We see it in the wastewater. Clearly, it's going up. It went up very sharply, very recently. It's also the BA.2 variant but I think it’s more related to the public messaging and masking and just people wanting to hear that message so much.”

The study of wastewater is not new. Scientists began using it in the 1960s to monitor diseases such as polio.

Goodridge said that prior to the pandemic, he was part of a team that used wastewater to detect food borne pathogens, such as salmonella. The tool proved useful in identifying an outbreak of a pathogen that may not have been reported to public health officials as most individuals do not seek medical help for gastrointestinal distress.

“Moving forward, I think that's really the major advantage of wastewater based events, that any pathogen that's found in the wastewater one can potentially search for,” he said.

Edwards added that wastewater can also be used to measure levels of illicit substances within a population as well as other chemicals and biological signals.

She said the great part about wastewater data is that “it’s not biased by who’s getting tested.”

“You can really see these waves of variants sweeping through the population at different times in different jurisdictions across the province. That's quite cool.”

A man collects sewage samples from the dorms at Utah State University Wednesday, Sept. 2, 2020, in Logan, Utah. Experts say daily COVID-19 case counts aren't painting a true picture of viral activity in communities as testing decreases in parts of the country. But what we flush down the toilet might give us a better understanding of COVID-19's prevalence. THE CANADIAN PRESS/AP/Rick Bowmer